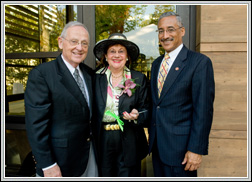 One day in 2000, Virginia Commonwealth University President Eugene P. Trani, Ph.D., noticed an unusual entry on his calendar for a meeting with Inger V. Rice.

He had no idea why she would want to see him.

That afternoon she appeared in his office with a grand gift and, in her eyes, a conundrum.

First, Rice told Dr. Trani that she planned to donate the proceeds from a charitable trust to VCU. But, she said, she also owned 343 acres on the James River in Charles City County and she had no plan for the land. “Would you want that, too?” she asked.

Dr. Trani thought about it for a nanosecond and gave a resounding “Yes!”

Eight years later, the pair met once again, this time to dedicate the Walter L. Rice Education Building at the VCU Inger and Walter Rice Center for Environmental Life Sciences. They each recounted parts of the story of the VCU Rice Center’s creation at the event in October.

“This is all because of the vision of one lady of Richmond who thought this land could become something more,” Dr. Trani said.

Rice, in turn, lauded Dr. Trani for his support that morning back in 2000.

“With a dream I went to Dr. Trani and he immediately had imagination and then he had enthusiasm,” she said. “It is fantastic to see all the work that has been done. The building is practical, architecturally beautiful and it will last forever.”

The education building completes the first phase of development at the property, which VCU uses for research, education and outreach. The building will serve as an educational tool for faculty, students and the community at large to illustrate the benefits of sustainable building practices.

“This is one of the most impressive field stations in the country right now,” Dr. Trani said. “This beautiful, eco-friendly building will further enable VCU to establish itself as a leader in large-river ecosystem research.

“It also showcases VCU’s dedication to the environment and to the education of students, whether they are at VCU now or in the middle and high schools in the surrounding communities.”

In September, the VCU Rice Center saw the addition of the education pavilion, an outdoor classroom adjacent to the education building that VCU named for Drs. Richard J. and Carol L. Rezba and Dominion.

To make a gift to the VCU Rice Center, contact Catherine Dahl, director of development for VCU Life Sciences, at (804) 827-7372 or ccdahl@vcu.edu.