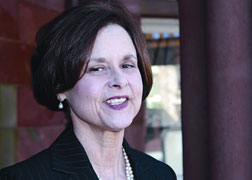 When Bonnie Mani (M.P.A. ’81; Ph.D. ’87) graduated from East Carolina University with a Bachelor of Music degree, she had no idea she would become a pioneer at Virginia Commonwealth University. Her goal was to pursue a graduate degree in music and to teach at the college level. Her career track, however, took a different course.

Encouraged by her father to join the federal civil service as a means of supporting herself through graduate school, Mani obtained a job at the Internal Revenue Service in Richmond, Va., answering taxpayers’ questions on the telephone, and she soon began working on her Master of Music degree at VCU.

Mani’s career advanced with the IRS, and eventually, she had to choose between pursing music and her successful path with the IRS. VCU’s Master of Public Administration degree program was relatively young at that time and had piqued her curiosity. Learning of Mani’s interest, then-professor Leigh Grosenick, Ph.D., recruited her as a graduate student.

“I was very impressed with him and the other M.P.A. faculty members, so I changed my major,” Mani recalled. “The M.P.A. program better accommodated someone with a full-time job, offering their classes in the evening and on weekends.”

Completing a circle of lifelong learning, Mani has returned to her undergraduate alma mater, East Carolina University, where she is now a professor in the Department of Political Science, teaching courses in human resource development, women in politics, women and public policy, and public administration. Mani has written two books and several articles and is nationally recognized as an expert on women’s rights.

Both ECU and VCU have been significant in Mani’s life, and as an expression of her loyalty and dedication, she has included both universities in her estate plans. Her gift to VCU will fund the Dr. Bonnie G. Mani Awards in Public Administration. These merit-based awards will help full- and part-time graduate students defray the expenses associated with data collection and analysis related to the candidates’ dissertations.

“As a faculty member who spent thousands of dollars out-of-pocket for my own academic self-improvement, I also hope funds for faculty development in these two areas will be awarded as a result of my gift,” she says.

Planned gifts such as Mani’s impact the lives of future generations of VCU students, said Lois Badey, director of development in the College of Humanities and Sciences.

“Alumni and friends who include VCU in their estate plans are recognized as members of the VCU Heritage Society,” she said. “By taking a proactive and thoughtful approach to estate planning, alumni affect the university’s ability to sustain the momentum of excellence, which has become a hallmark of VCU.”

For more information on planned giving in the College of Humanities and Sciences, contact Lois Badey, director of development, at (804) 827-0856 or labadey@vcu.edu.