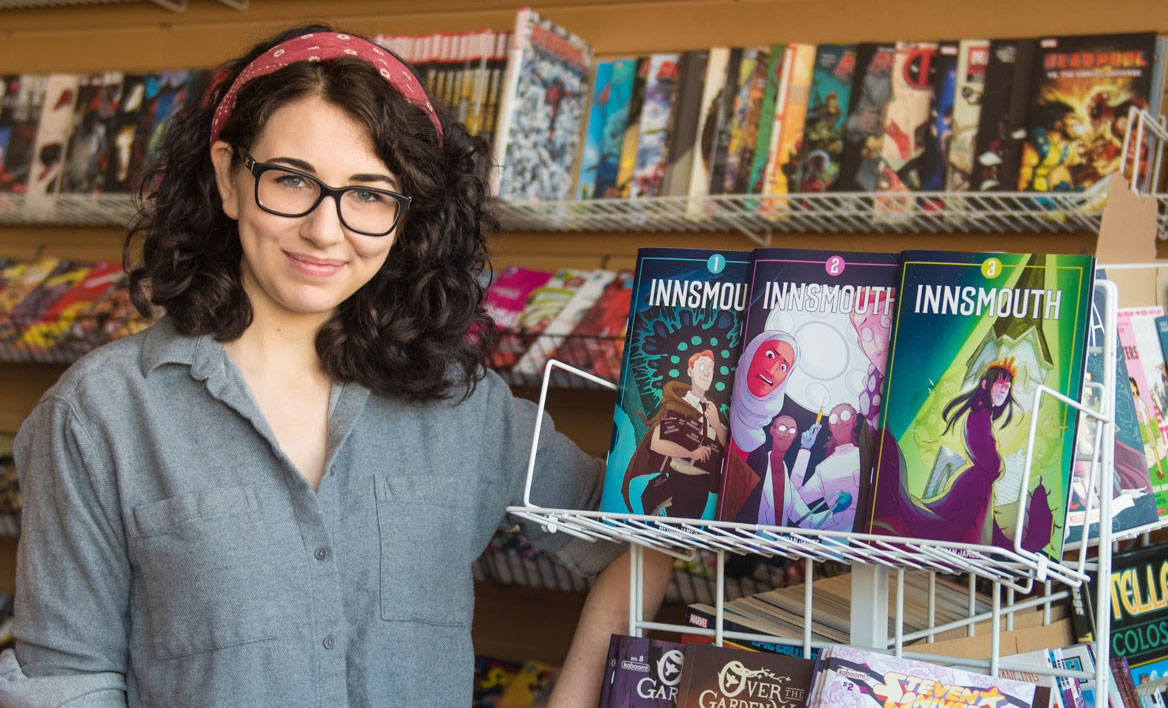 The annual Small Press Expo is one of the premier events for artists, writers and publishers of independent comics and provides a forum to showcase new and emerging talent in the field. This year, it was one of several comic conventions at which Virginia Commonwealth University School of the Arts alumna Megan James (B.F.A.’17/A) promoted her comic book series, “Innsmouth.”

The story of a group of incompetent door-to-door cult members who accidentally bring about the end of the world, “Innsmouth” exists in the context of a more well-known body of work – that of influential horror-fiction writer H.P. Lovecraft.

“Lovecraft encouraged people to take his work and make their own version of it,” James explains. “It’s basically become its own genre: cosmic-horror.”

At promotional events, James easily engages with fellow horror fans who often recognize the title of her series as a ref­erence to a fictional town from one of Lovecraft’s short stories. But she is just as happy to reach out to uninitiated but curious passers-by and invite them into the world she has created.

“It’s been a pretty good formula so far,” she says. “Typically, someone will walk up to my booth, and I can see that they want to ask what the comic is about, so I try my best to connect with them and tell them a bit about the series. The premise of the story is pretty funny, so I usually get some laughs explaining it. At that point, if they’re into it, they’ll usually pick up an issue or two.”

This approach has helped James profit in the increasingly competitive field of independent comics. Since James landed a five-issue publishing deal with Richmond, Virginia-based Sink/Swim Press in 2016, “Innsmouth” has amassed a sizable following, launching a career that James once considered unlikely. Despite a lifelong passion for comics and storytelling, she knew that catching a break in the field would take ambition and hard work.

“I knew I wanted to be able to tell stories, but every time I considered other paths, I kept coming back to comics,” she says. “I thought, ‘This format is really how stories make sense in my head, and I want to be able to explore narratives in the way that feels most natural to me,’ so I stuck with it. I’m really happy that I did.”

TOOLS OF THE TRADE

A successful comic obviously requires eye-catching visuals, but it also relies on a compelling storyline. James credits her VCU education with helping her develop both parts of her craft.

In her first semester at VCU, she took a creative writing class in VCU’s Honors College.

“I ended up going on to pursue a creative writing minor, so that course started me along the path of using those skills to add to my artwork,” she says.

James received two scholarships in the Honors College – the Marcus and Carole Weinstein Honors Scholarship and the Jay and Sondra Weinberg Undergraduate Scholarship in Honors – and says the awards strengthened her connection to the program.

“Obviously, the financial relief is significant because it’s always helpful to not have to take out additional loans. But receiving scholarships from the Honors College really motivated me to stay engaged with the program through all four years,” she explains, noting that the challenging Honors curriculum helped her develop a strong work ethic that has also bene­fited her comic book career.

During his service on the VCU Board of Visitors from 1989 to 2001, Jay Weinberg became aware of the university’s need for scholarship funds and made it his goal to help address that need. The Weinberg Scholarship has been providing financial assistance to meritorious students formally enrolled in the Honors program since 1998. Over the years, Weinberg has contributed nearly $1 million to the fund.

“I’ve always felt that if a student has the ability and the desire to succeed, the least we can do is help them along that path,” he says, adding that he believes those who do receive such help ultimately return the favor when they become successful.

Honors College Dean Barry Falk, Ph.D., says that supporters like Weinberg help the Honors College fulfill its mission to promote academic excellence at VCU and offer high-achieving students from across the university extraordinary opportunities to realize their potential.

“Our students go on to pursue careers in a variety of fields, so our goal is to provide them with educational experiences inside and outside of the classroom that help them build a foundation for future success, wherever their dreams and passions may lead them,” he says. “We’re grateful to our donors for their partnership in that goal.”

This October, James released the fourth installment of “Innsmouth,” which she says marked a significant milestone in the series.

“I worked on ‘Innsmouth’ for several different class projects and independent studies as a student, so I always had feedback from my professors,” she says. “The most recent issue was the first one I created without that outside input, so I was off on my own for the first time.”

James says the creative process for “Innsmouth” was informed by her studies as a communication arts major in the VCU School of the Arts. One of the most notable influences is her use of 3-D modeling as an aid to her illustrations, all of which are done through a combination of digital programs including Photoshop, Clip Studio and the iPad Pro app Procreate.

“Setting up the perspective foundations for drawings of exterior buildings, architecture and interior environments can take a lot of time, and when you’re working on a comic, you need to move quickly,” she says. “Instead, I make a digital dummy environment – just the bare bones of a setting – then pose it as needed, take screenshots and use those as reference for the final panel illustrations.”

From there, James builds on that framework by adding the details that set the tone of her work. Though the story’s foundation is based on Lovecraft’s work from the 1930s, James created a new cast of characters to bring “Innsmouth” into the modern day and address some of the source material’s more controversial elements.

“Lovecraft has a lot of baggage,” James explains. “Although his work deeply impacts the horror and sci-fi genre to this day, he was, to put it bluntly, a super-racist dude. Recently, however, there has been a wave of compelling new work in the genre re-interpreting his canon through the lenses of the minorities he often maligned. My work in ‘Innsmouth’ is considerably more lighthearted than most of the typical cosmic-horror fare, but I still think it’s impor­tant to address these issues where I can and to have as much of a diverse cast as possible.”

The new characters are drawn with comically over-exaggerated expressions to highlight the humorous dialogue that drives the plot, and where Lovecraft’s work usually evokes imagery heavy with muted colors like shades of grey and brown, James’ use of color helps lighten the mood.

“My version of this world is funnier, goofier and more vibrant,” she says.

Fans of the series have made clear their interest in getting a closer look at the world of “Innsmouth.” Last spring, 42 people contributed more than $1,600 to a crowdsourcing campaign that funded “The Art of Innsmouth,” a 52-page, self-published collec­tion of artwork created during the production of the series.

The fifth issue of “Innsmouth” is due out this spring, and although this installment is intended to bring the story to a close, James isn’t sure it will truly be the end. If the characters still have stories to tell, she is open to expanding the series.