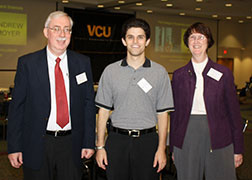 Emily Murphy, 22, had just begun her graduate studies and teacher assistantship on a full scholarship in Virginia Commonwealth University’s forensic science program when she was killed in a car crash Nov. 2, 2002.

The Emily R. Murphy Scholarship was immediately established in her memory through gifts from faculty, family and friends. The merit-based scholarship is awarded each spring to a graduate student in the College of Humanities and Sciences’ Department of Forensic Science.

“Although we were still numb and grieving deeply, we realized what an honor this was for Emily,” said Emily’s mother, Sherrie Murphy. “She had only been [at VCU] for about three months and to think that she had made that much of an impression made us feel good.”

The Murphys attended a dinner in spring 2003 to honor the first scholarship recipient, Jocelyn Carlson (M.S. ’03).

“Jocelyn had known Emily and that made it very special,” Murphy said. “We really wanted to meet her. It was a difficult meeting, but it was comforting, too.”

Carlson, now a DNA analyst for the Baltimore Police Department, said she was honored to meet the Murphys. They kept in touch until Carlson graduated.

Carlson and Emily Murphy were lab partners in chemistry class and participated in a work-study program together in the office of VCU’s criminal justice department.

“I truly think it was wonderful of VCU to honor Emily in this way and to create this scholarship to remember her with,” Carlson said. “It’s great that the graduates of the department, her friends and family are keeping her memory alive through keeping this scholarship going.”

The Murphys have received many letters of gratitude from recipients over the years. “We truly appreciate it when students write letters to us,” Murphy said. “The letters mean a lot and it is good to know that Emily is helping other students to realize their dreams.”

Last year, to Emily’s parents’ surprise, their son, Chuck Murphy, decided to apply to the music education program at VCU to earn his second bachelor’s degree.

Chuck Murphy said he chose VCU because of the music program and to honor Emily’s memory. He recalled what his sister told him about how much she enjoyed the faculty and being a teacher’s assistant at VCU.

The Murphys have contributed $500 annually to the scholarship established in their daughter’s name, and donations have continued from friends and family.

“The Emily R. Murphy Scholarship has been an outstanding way to remember an exceptional young woman and to identify and honor fellow students demonstrating Emily’s commitment to excellence in scholarship and service,” said Bill Eggleston, chair of the Department of Forensic Science. “The department is grateful to the Murphys and others whose contributions made this annual scholarship possible.”

To make a gift to the College of Humanities and Sciences, contact Lois Badey, director of development, at (804) 827-0856 orlabadey@vcu.edu.