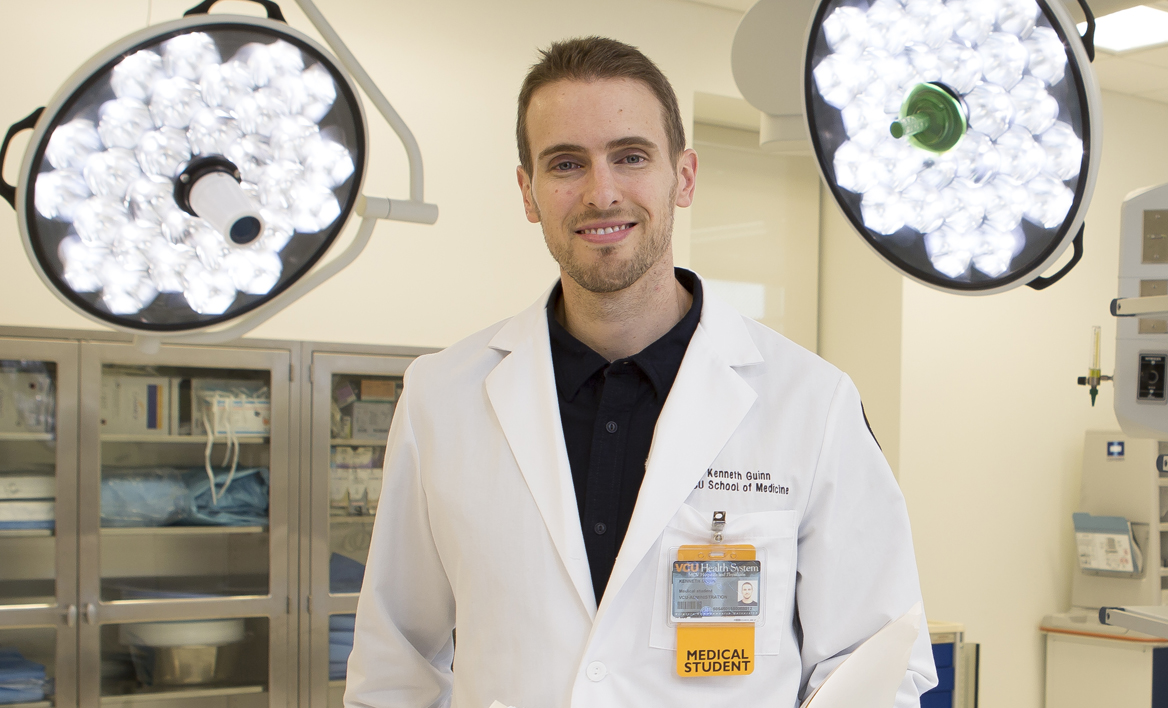 Kenneth Guinn first experienced the fast-paced, high-stakes environ­ment of the emergency room as a volunteer at a hospital near his undergraduate university.

“I loved the energy,” he says, “and the sense of urgency knowing that patients needed immediate help.”

After those experiences, Guinn knew he wanted to go to medical school. What he didn’t know yet was that his journey to the Virginia Commonwealth University School of Medicine would involve a few unexpected diversions.

“I just always assumed I would go right into medical school after earning my bachelor’s degree,” he says. “I never even considered another path to that goal.”

But as Guinn neared the end of his undergraduate education, something else occurred to him: a feeling that it was his duty to serve his country. Instead of applying to medical school, he joined the Navy.

“When you’re enlisted, you’re pretty low on the totem pole, so respect and humility go a long way,” says Guinn, who com­pleted a four-year enlistment before being discharged honorably. “I learned a lot about character during my time in the military, which I believe will be useful in my future medical career.”

Guinn was finally ready to take everything he’d learned and get back to work pursuing his original dream of a medical degree. He was accepted into the VCU School of Medicine in 2015. But after years away from the classroom, he faced the challenges of not only returning to school as a nontraditional student but also affording an expensive medical degree.

Relief came via the Stephen C. and Marie F. Cenedella Endowed Scholarship, a renewable award that Guinn has received both of his years at VCU.

“When you think about the costs – tuition, books, even living expenses – it all adds up,” Guinn says. He also receives help through military benefits and says every bit helps. “The financial benefit of the scholarship has been great, but it’s also a confi­dence-booster. It means a lot when someone shows that they support you and believe in your success.”

Awarded annually to students in the VCU School of Medicine based on both merit and need, the Cenedella Scholarship was established with a gift of $125,000 from Stephen C. Cenedella, M.D. (M.D.’68/M), and his late wife, Marie (B.S.’67/AHP), in December 2005.

“I’ll never forget how relieved I felt to have that last year paid for,” Cenedella says. “I always knew I wanted to pay it forward.”

Cenedella hopes his support will help medical students pursue their passion without being discouraged by the financial burden.

“My advice for them is to follow their heart and never forget why they wanted to become doctors: to help others,” says Cened­ella, who has seen more than 200,000 patients since his career in family medicine began in 1972.

Last November, Cenedella made arrangements to give an additional $100,000 to the scholarship fund through his individ­ual retirement account. With this additional gift, Cenedella is contributing to the School of Medicine’s 1838 Campaign, which aims to recruit and reward top students and to reduce student debt.

Peter F. Buckley, M.D., dean of the VCU School of Medicine, says the campaign is a way to level the playing field for all stu­dents. When the Liaison Committee on Medical Education, the accrediting body for medical schools in the United States, visited VCU last year, they gave the School of Medicine high marks and a full eight-year re-accreditation. In their review, they paid special attention to the level of educational debt students carry, which is an issue nationwide.

“The accreditors were glad to see that we’ve launched the 1838 Scholarship Campaign to build an endowment that’s on par with our peer schools,” Buckley says. “Combined with tightly limiting tuition increases, it’s our approach to helping talented and com­passionate students fulfill their dream of becoming physicians – regardless of their families’ financial resources. We’re enormously grateful to Dr. Cenedella for his partnership in that goal.”

Guinn is on track to graduate from the School of Medicine in 2019. He has maintained his passion for emergency care and still experiences the same rush of adrenaline that inspired him to pursue it as a career.

In a letter of thanks to Cenedella, Guinn explained that al­though his path to medicine was not as direct as he’d imagined, he believed his experience would help make him a better doctor.

“While I have not taken the traditional path to medicine, I have learned and grown so much more through my alternative route,” he wrote. “I plan to remain a creative, outside-the-box thinker who is not afraid to take the road less traveled.”