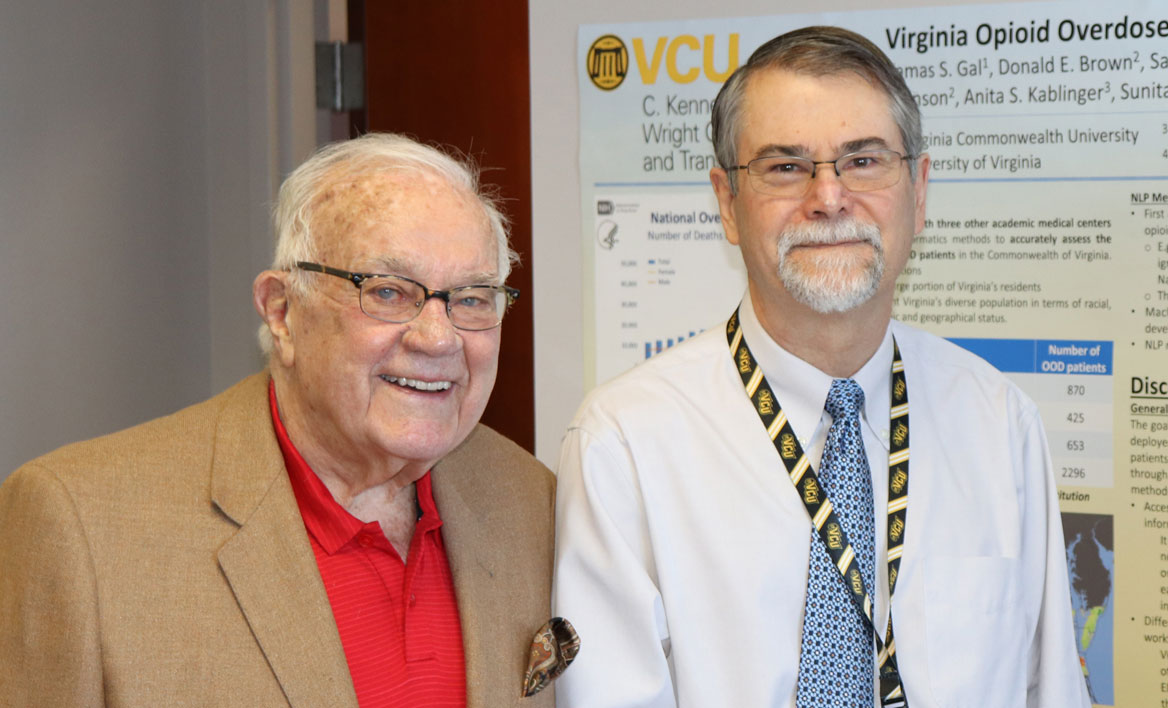 The gift that keeps on giving

Scientists from VCU’s Wright Center for Clinical and Translational Research stand out among competitors for NIH funding, thanks to significant donor support

Electronic cigarette devices are often touted as a safer alternative for smokers looking to quit. Recreational use of e-cigarettes has become more common, especially among teenagers and young adults, since the devices entered the market in 2007. The long-term health effects of e-cigarette use have yet to be determined, and researchers are playing a critical role in shaping the public discourse around how to adequately regulate e-cigarette products.

Among these researchers is Rene Olivares-Navarrete, D.D.S., Ph.D., assistant professor in the Virginia Commonwealth University Department of Biomedical Engineering in the College of Engineering. As a biomedical engineer, Olivares-Navarrete takes a cross-disciplinary approach to his research to improve treatments for patients with craniofacial and orthopaedic issues. Most recently, he conducted a study that demonstrated for the first time that e-cigarette use during pregnancy can cause birth defects of the oral cavity and face.

“So far, most e-cigarette research has focused on diseases like cancer and pulmonary disease because those are classically associated with smoking. But most e-cigarette users are young, and more immediate concerns for that age group are growth, development and reproductive health,” Olivares-Navarrete says. “In many cases, women who use e-cigarettes during pregnancy have been told by doctors that the devices are healthier than conventional cigarettes. We want people to know what the consequences may be so that they can make informed choices about using these products.”

In the study, frog embryos exposed to mixtures of saline and various e-cigarette vapors developed craniofacial defects such as cleft palates. The next step, Olivares-Navarrete says, is to determine exactly which elements of the vapor cause the defects.

Supporting cross-disciplinary research like Olivares-Navarrete’s is one of the primary goals of VCU’s C. Kenneth and Dianne Wright Center for Clinical and Translational Research. Established in 2007, the center provides resources to encourage collaboration among VCU investigators and students, community partners and government organizations to advance the scientific study of human health.

The Wright Center offers a range of services, such as training for early-career investigators and consulting to help with planning, implementing, conducting and disseminating research, which are open to researchers from any department or school within the university. The center also has several mechanisms in place to provide grant funding for research projects.

Last fall, Olivares-Navarrete received a grant from the Wright Center to fund his current research to pinpoint how e-cigarette vapor causes craniofacial defects. Olivares-Navarrete has received grant funding from the National Institutes of Health for some of his e-cigarette research, but federal funding is increasingly difficult to secure, he says.

“NIH funding is extremely competitive,” he explains. “Sometimes the difference between your proposal and another is the amount of institutional support you have behind you.”

Wright Center Director F. Gerard Moeller, M.D., says that funding from within a researcher’s institution, such as the grant that Olivares-Navarrete received from the center, indicates the strong institutional support that NIH reviewers often look for when awarding grant funding.

“Because of various cuts to the federal budget, the NIH wants to know that their funding will build on a foundation of support that is already there,” he says.

The Wright Center can provide this level of support for its researchers, Moeller says, thanks in part to private philanthropy from donors such as the late C. Kenneth Wright (H.L.D.’11), whose first gift to the center, of $16 million, named it in 2015. With the gift from his foundation, Wright enhanced the center’s abilities to recruit distinguished researchers from around the country and to prepare top students for careers in research by establishing six C. Kenneth and Dianne Wright Distinguished Chairs in Clinical and Translational Research and the C. Kenneth and Dianne Wright Physician-Scientist Scholars Program, named for Wright and his wife, Dianne. In 2018, he renewed his support with a $5 million gift to help the center expand its biomedical informatics program.

The Wrights developed close relationships with many VCU Health care providers while Dianne received treatment for ovarian cancer at VCU Massey Cancer Center. After her death in 2013, Wright honored her memory by supporting research efforts across the university until his death in August 2019.

“Dianne lived for 12 years after she was advised she had cancer, and she didn’t change her lifestyle one bit. We traveled all over the world in that time. She didn’t waste those years. I know she would be glad that I’m doing this,” Wright said in a January 2019 interview, adding that his ultimate hope was that his support would lead to advancements that help other patients thrive despite their illness.

The biggest NIH award the Wright Center has received so far is a five-year, $21.5 million Clinical and Translational Science Award from the NIH’s National Center for Advancing Translational Sciences in May 2018. The largest NIH grant ever awarded to VCU, it will provide the funding the Wright Center needs to support groundbreaking research like Olivares-Navarrete’s and unite academic, community and industry partners to improve community health and health care.

“In getting this award, we joined a consortium of 58 research institutions, and very few of those hubs have the kind of philanthropy that Mr. Wright has provided for us,” Moeller says.

Over the course of his relationship with VCU, Wright’s giving has had a transformational impact throughout VCU.

“The Wrights came to VCU with a big vision, a strong resolve to accomplish that vision and a deep commitment to using their talents and resources to change the world,” VCU President Michael Rao, Ph.D., said of the couple in 2015. “Through their deep generosity, Dianne and Ken have forever changed our great university. We owe them a debt of gratitude for investing so much into VCU and, more importantly, its people.”

To learn more about the C. Kenneth and Dianne Wright Center for Clinical and Translational Research, contact Brian S. Thomas, vice president and chief development officer at the MCV Foundation, at (804) 828-0067 or brian.thomas@vcuhealth.org.