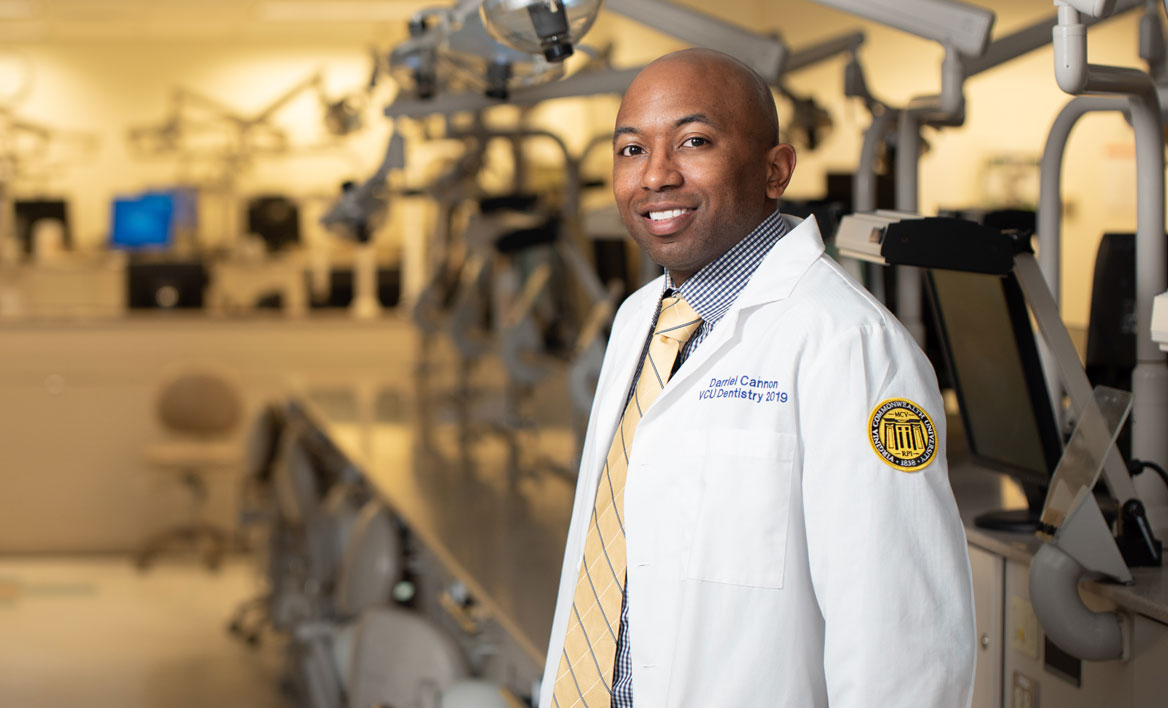 Thanks to scholarships, nontraditional dental student follows his passion and becomes a role model for the next generation

A fortuitous “quarter-life crisis,” as he characterizes it, diverted Darriel Cannon (Cert.’15/H&S) from Wall Street in New York City to Broad Street in Richmond, Virginia, where he’s studying to become a dentist, applying to oral and maxillofacial surgery residency and working to increase the enrollment of underrepresented students in the VCU School of Dentistry.

A Delaware native who grew up in Midlothian, Virginia, Cannon earned a business degree from Guilford College in Greensboro, North Carolina. A few years into his financial career, he realized that the cutthroat culture and grueling hours would not help him have the traditional family life he wanted.

Cannon boldly jettisoned a banking position with JPMorgan Chase to reboot his career in 2012. “It was like, ‘It’s not making me happy,’” he says. “I need to go find that thing that is going to make me happy.” He shadowed a pediatric dentist friend and was hooked.

After two years of post-baccalaureate study in health sciences at VCU, Cannon was accepted into the School of Dentistry. With the help of scholarships created by his School of Dentistry predecessors and clinical and fellowship awards from the school, Cannon, 34, has succeeded academically at VCU and is on track to graduate in 2019.

Cannon has been president of his dental class all four years of his VCU education as well as president of the VCU Student National Dental Association, an organization that aims to increase the minority footprint in dentistry, to help retain African-American students and to deliver improved health care to underserved patients.

One of his favorite projects for SNDA is Impressions Day. Held each fall for Virginia undergraduate students from diverse backgrounds, the recruitment program gives students hands-on experience with dental simulations, mock admission interviews, financial aid seminars and other information they need to prepare for dental school. Cannon has volunteered with Impressions Day each year and helped promote and organize it in 2017.

“I enjoy meeting the next generation of dentists and hearing their stories,” he says. “I also enjoy planting a seed of hope and inspiration in those who feel like the road to and through dental school will be tough.”

Last fall, the Impressions Day promoted and run by Cannon attracted 116 applicants for 60 spaces, says VCU dentistry program coordinator Lindsay Smith (M.Ed.’18/E). “I think the increase can be attributed to better marketing of the program and the strong relationships the SNDA has formed with various predental groups on undergraduate campuses,” she says.

“It’s gotten better every year,” says Tonya Parris-Wilkins, D.D.S. (D.D.S.’03/D), of Impressions Day. A former instructor at the school, she has served as a mock interviewer for the event and says “it’s just building on the foundation” of diversity for the School of Dentistry and VCU as a whole.

This foundation is important to Parris-Wilkins and her husband, Joseph D. Wilkins (M.S.’01/AHP; D.P.T. ’06/AHP; M.S.H.A.’11/AHP). Tonya serves on the Virginia Board of Dentistry, and Joe is CEO of Wythe County Community Hospital in Wythe County, Virginia. The couple established the Parris Wilkins Scholarship Fund in January 2012, the same week she opened a dental practice in Colonial Heights, Virginia. The goal of the scholarship is to increase diversity in the dental school, she says. “I want to make sure the profession still is accessible to all people and that it stays open to underrepresented minorities.”

Through Impressions Day in 2016, Cannon crossed paths with Parris-Wilkins. She had attended Impressions Days each year since it began and was so impressed by the volunteers at the event in 2016 that she decided to establish three more scholarships – one of which went to Cannon in 2017.

Cannon’s impact at VCU extends beyond Impressions Day. Each year, he has coordinated Give Kids a Smile Day, which has provided free oral health care for 1,500 underserved area children during his tenure. He also has volunteered with VCU Dental Scholars, an after-school program that exposes high school students to dental careers through activities such as carving a tooth out of soap and suturing a banana.

Being awarded the Parris Wilkins Scholarship, among several others, was a “critical boost,” Cannon says. “You have your loans, but when you get a scholarship, that kind of dictates how much more you can do.”

Cannon says the scholarships eased the burden of purchasing costly board study materials, paying for test fees and funding travel expenses for externships. “The materials for the entrance exam to get into residency are pretty expensive,” he says. “These processes aren’t cheap, and any little bit of extra help you can get is very much appreciated and needed.”

The impact of a scholarship transcends the financial aspect, says David C. Sarrett, D.M.D., M.S., dean of the VCU School of Dentistry and associate vice president for health sciences.

“It’s a recognition of their talents and their commitment to not only their education but also to the profession,” he says. “In the case of this scholarship, there’s a component of helping to improve the diversity in our profession.”

About 12,000 students apply to the 64 dental schools in the United States each year, but only about 600 are African- American, Sarrett says, adding that in the African-American community, dentistry has not been promoted as vigorously as, for example, the medical profession.

“Darriel, and certainly Dr. Parris-Wilkins, are creating role models out there for younger people because there is not a lack of talented individuals who can apply,” Sarrett says. “It’s more the interest and desire to want to go into dentistry that’s really the challenge in the African-American population.”

Parris-Wilkins wants her gifts to continue building the foundation of diversity at her alma mater that began with James A. Booker Jr., D.D.S. (D.D.S.’61/D; H.S.’71/D), the first African-American student admitted to the School of Dentistry in 1957. “I think when you see someone who looks like you, who is a few years ahead, you’re saying, ‘You know what? This really is possible for me to do. It’s possible for me to graduate. It’s possible for me to be successful in this profession.”

To learn more about the School of Dentistry, contact Gloria Callihan, associate dean for development, at (804) 828-8101 or gfgreinercal@vcu.edu.