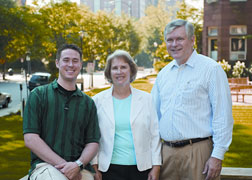 When alumnus David Phillips (B.S. ’76; M.B.A. ’82) and his wife, Joyce, established three merit-based scholarships for Virginia Commonwealth University students, they had these goals in mind: to give back to their alma mater, to express their gratitude for students who have served their country, to provide support for high-achieving VCU students and to honor members of their family with permanent endowments in their names.

The Phillipses created the scholarships at VCU because that’s where they met, 37 years ago as sophomores, during the first week of the fall semester.

“VCU will always have a special place in our hearts because it brought us together — it gave me the tools and education needed to compete in the business world because of its original mission to attract Virginia students, many of whom are first in their family to attend college,” David Phillips said.

First, the couple created the Meadows L. Phillips and Thomas H. Weatherford Veterans Scholarship. The award is named for David Phillips’ father, the late Meadows Phillips, who served in the U.S. Army in the Pacific; and David Phillips’ cousin, the late Thomas Weatherford, a member of the U.S. Army Rangers who served in Europe. Both were decorated combat veterans during WWII.

The Meadows L. Phillips and Thomas H. Weatherford Veterans Scholarship was endowed in 2005 and became available to any qualified veteran of the U.S. armed forces studying in the College of Humanities and Sciences at VCU.

The Phillipses continued to make contributions to the endowment so the scholarship could be awarded to two students annually. Last year, the second award was established for qualified veterans who intend to pursue a career in teaching or education administration.

In addition, the couple in 2007 established the merit-based Mary Ballard Scholarship for women’s soccer in memory of Joyce Phillips’ mother. Joyce Phillips described Ballard as the ultimate soccer grandma. The scholarship in her name supports students who show exceptional talent through VCU women’s soccer. Each recipient is awarded $500.

In 2007, they met soccer star Amanda Adams (B.I.S. ’10; M.T. ’10). She won the Ballard Scholarship for three consecutive years and graduated this past May.

“We have been big fans of Amanda both on and off the soccer field over the past three years,” David Phillips said. “We know she is going to achieve great things in her life and make the world a better place.”

Adams calls the Phillipses her angels. “They have always been so humble,” she said. “They act like I am the one giving them something.”

Another recent graduate, Daniel Grant (B.A. ’08; M.P.A. ’10), a Navy veteran who studied in the L. Douglas Wilder School of Government and Public Affairs, was awarded the Meadows L. Phillips and Thomas H. Weatherford Veterans Scholarship for two consecutive years. He and his parents met the Phillipses in 2008.

“Without the scholarship, I wouldn’t have been able to finish graduate school,” Grant said. “The scholarship has really been a blessing.”

In November, the couple attended the annual Monroe Park Campus Scholarship Dinner to celebrate Grant’s second award and to meet Goodman. At the reception, Goodman moved the audience with his speech about receiving a scholarship bearing the names of two decorated combat veterans.

“I come from a long line of veterans,” Goodman said. “It is with these two men that I feel an unbreakable bond. These men bravely served, but they also inspired generosity in others.”

The Phillipses said they were deeply touched by his speech.

“We are humbled and grateful for the service and sacrifices of these young people. Meadows Phillips and Thomas Weatherford would be so proud of each of the veterans who received the scholarship and would appreciate the legacy of service to our country,” David Phillips said.

Beverly J. Warren, Ed.D., Ph.D., FACSM, interim provost and vice president for academic affairs said, “By investing in these students who have served their country, the Phillipses provided the perfect expression of gratitude while offering the opportunity to pursue academic excellence now and in the future.”

To make a gift to the College of Humanities and Sciences, contact Lois Badey, director of development, at (804) 827-0856 or labadey@vcu.edu.