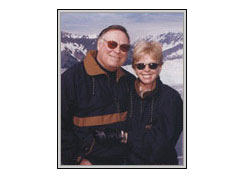 Back pain evidently leads to couple’s donation for neurological services

In 2000, back pain introduced James McGlothlin to Dr. Harold Young, Chief of Neurosurgery for more than half of his 30-year tenure at the Virginia Commonwealth University Medical Center, and a neurosurgery team that is known for its high-quality care, dedicated patient follow-ups, and excellence in teaching and research. In the intervening years, both McGlothlin and his wife, Fran, have traveled from their home in Bristol, Va., for care. Along the way, they became impressed with the team’s compassionate commitment to patients and their full recovery.

When the McGlothlins first encountered Young, neurosurgery was a division within the larger surgery department. As founder of The United Company — and now chairman of the board, chief financial officer and president of what has grown into one of the country's largest privately held companies — McGlothlin is familiar with the resources that are needed to shepherd an organization to the top of its field.

In Young, he found a surgeon who had built a program that currently ranks 10th among its peer departments in terms of grant funding from the National Institutes of Health, having generated more than $27 million in sponsored research. With a goal of perpetuating Young’s strength of leadership in patient care, teaching and research, the couple made a $2 million gift to establish the James W. and Frances G. McGlothlin Chair in Neurosurgery. Their gift provided a broader financial base for neurological services, making it possible for the division to operate independently.

“Not only has Dr. Harry Young truly been a guardian angel for Fran and me, but certainly for thousands of others as well who have experienced his skill, talent, and dedication to the treatment and service of his many patients,” says McGlothlin, who also serves as a board member of the MCV Foundation. “We all are indebted to Harry for the many contributions he has made to health care on our behalf.”