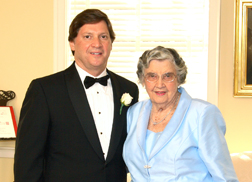 In Prince Edward County's gently rolling countryside, about an hour from Richmond, Va., sits the small community of Rice. Almost a straight shot to Virginia Commonwealth University's MCV Campus by way of Route 360, the journey is a familiar one for those living in rural Southside Virginia.

"MCV had a wonderful reputation in my community," recalled Dr. L.W. Garnett (M.D. '79; H.S. '85). "People had a high regard for the hospital and placed their trust in its ability to handle complex and serious medical problems."

How fitting, then, that the boy with a curiosity for medical artifacts grew up to study at the venerable institution that he, his family and his community respected as the source for excellent health care.

Garnett recalls a trip he made with his parents to the medical center, which served as the springboard for his early interest in medicine. To occupy her son while they waited for his father's appointment to conclude, Garnett's mother suggested a visit to the archives across the street.

"There I saw historical aspects of MCV at the Health Sciences Library and the Museum of Confederacy and was fascinated to see for myself the institution I'd heard about all my life. It was an impressionable age." Taking that tour at age 10, he said, "set the thought process in motion."

The experience, coupled with his mother's encouragement and the medical school's reputation, led Garnett to become an orthopaedic surgeon. He, in turn, set the example for his daughter Sarah (M.D. '10) to follow in his footsteps as a member of the School of Medicine's Class of 2010. Garnett is excited and proud that Sarah has decided to remain on campus for her radiology residency.

Garnett had heard that future students would study in a new medical education building. At a luncheon hosted by Jerome F. Strauss III, M.D., Ph.D., dean of the VCU School of Medicine, "I was pleased to have the chance to see the detailed plans," Garnett said. "The new school opens up a whole new opportunity of education for the future."

Garnett honored his mother's memory through a generous $100,000 gift to the building campaign. "She was an inspiration," he said.

His gift bolsters the $37 million private- gifts component of the public-private partnership. The new building will provide instructional and simulation space and will allow for expanded enrollment. The building is slated to open in spring 2013.

Garnett knows that his mother, a former teacher who helped shape the lives of many, would be pleased to be remembered through a gift to an innovative educational facility.

"I'm proud of MCV's history and heritage," he said. "I appreciate my experience as a student and resident, and I'm grateful for the experience that Sarah is having. But I also recognize the importance of this new education building for propelling the medical school into the future. MCV needs this building, and I'm excited to be part of that."

Families with multigenerational ties to the medical school, such as the Garnetts, have an excellent opportunity to honor their families' connections to the school through gifts to the new building. The Garnett family name will appear on the lobby's donor wall as well as on a group classroom as a lasting tribute to an inspirational teacher and loving mother.

To learn more about the Campaign for the School of Medicine, contact Tom Holland, associate dean of development for the school, at (804) 828-3800 or teholland@vcu.edu.