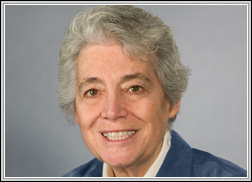 In the world of chemistry, Lidia M. Vallarino, Ph.D., is a pioneer. The Virginia Commonwealth University professor first moved to the U.S. from Milano, Italy, in the early 1960s to join her husband, James V. Quagliano, also a chemist.

After the move, Vallarino had a difficult time finding a teaching position. Her husband was a professor in chemistry at Florida State University at that time.

“I couldn’t get any kind of academic teaching or research appointment in Tallahassee, even though I had been an associate professor at the University of Milano, a high-level institution,” she said. “There were so few women in U.S. chemistry then.”

Because she couldn’t teach, Vallarino worked with her husband as an unpaid postdoctoral assistant and devoted herself to publishing in her subject of expertise: inorganic chemistry. Often writing with her husband, Vallarino made a name for herself that way. The couple’s first book, a general chemistry textbook, was well-regarded and generated income for the family. Instead of spending the money, Vallarino and Quagliano put it away to pay for college for their three children. To Vallarino, education and creative efforts have always been more valuable than material concerns.

When her husband left FSU to accept an endowed chair position at Auburn University in Alabama, he spoke so highly of his wife that she, too, was offered a position. She came to VCU after her husband retired.

“I have found the atmosphere here at VCU to be extraordinarily stimulating and satisfying — a challenge and a joy,” she said.

Vallarino was 50 when she arrived at VCU, and as she got older, it became more difficult to find grants to support her research, she said. So she answered the need for funding herself, allocating more than $100,000 of her own money to the Lidia Vallarino Research Fund in the VCU College of Humanities and Sciences.

“Money is of no great personal relevance to me at this time of my life. Most of the money I spend is for traveling and to support my research,” she said.

Vallarino also wanted to provide aid to chemistry students. She set up the James V. Quagliano Fellowship in Chemistry and, as she said, “I would have started my own, as well, but my children said ‘No, no, no, this is our responsibility.’”

“There are some students who want to work hard and are very motivated, but they don’t have enough money and have to work and study less. The idea of the scholarship was to provide at least one student with some help — they get some money rather than having to deliver pizzas.”

“Just the thought of having an award that carries Dr. V’s name is an inspiration in and of itself,” Radwan said.

“Since I have worked as an undergraduate in her laboratory, I have learned so many things about chemistry, research, teaching and about life. … That is why she is one of my favorite professors, and that’s how she has shaped my academic path — because she worked really hard to shape her own, especially as a female chemist.”

To make a gift to the Department of Chemistry or the College of Humanities and Sciences, contact Bethanie Constant, senior director of development, at (804) 828-4543 or constantb@vcu.edu.