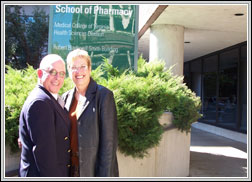 In 1963, Lance Berkowitz was studying at George Washington University’s School of Pharmacy when he got some bad news: The school announced it would be closing, and students who had not yet graduated would have to find another place to earn their degrees.

The students learned that the Medical College of Virginia would let them transfer without losing credits, the only school willing to do so. Already in his final year of study, Berkowitz joined 14 or 15 classmates at a place where they would be welcomed with open arms.

More than 40 years later, Lance Berkowitz and his wife, Fran, endowed a $100,000 scholarship in independent community pharmacy at Virginia Commonwealth University’s School of Pharmacy. The couple have spent most of their lives dedicated to that profession and now, through the endowment, they can ensure that today’s students consider the career and lifestyle that brought them so much joy.

The Berkowitz’s owned several successful independent pharmacies in Maryland. In their work, Lance provided customer care and worked within the pharmacies while Fran handled marketing, including calling on clinics and medical providers day after day. Aside from boosting their own pharmacies, Lance helped establish Epic Pharmacies, a support organization that provides independent community pharmacies with the buying power and support services needed to survive amid heavy competition from chains. The group, one of the largest of its kind in the country, now boasts more than 1,000 member stores in the mid-Atlantic region.

A different kind of pharmacy

Victor A. Yanchick, Ph.D., dean for the School of Pharmacy, cites several reasons for the continued success of independent pharmacies.

“They continue to exist because they’re very entrepreneurial,” Yanchick said. “They do not just focus on prescription filling. They focus very much on providing other types of service, whether it be disease-management programs or nursing home consultation or other services.”

Lance and Fran’s careers serve as an example of such an approach. From their first pharmacy, Arcade Pharmacy, to their most recent pharmacy, Professional Pharmacy of Essex in Maryland, the couple became pioneers in infertility care and worked with several large mental-health facilities to increase patients’ drug usage compliance. Now they hope the unique opportunities of independent community pharmacy along with the scholarship they have established will help entice students to follow a similar path.

One perk to community pharmacy, Lance said, is the ability to easily work with and actively get involved in one’s community. Lance estimates he and Fran have raised about $750,000 for charity organizations in Maryland.
Yanchick called scholarships such as this one “extremely important” to the livelihood of the school.
“These scholarships meet a great need for our students and help us recruit students if they know scholarships are available,” Yanchick said.

Meanwhile, Lance said, he hopes the student recipients will become innovators as he has in providing better pharmaceutical solutions and entrench themselves in improving healthcare for patients as an integral part of the health care delivery team.

“That is a very quality way of providing health care,” Lance said. “MCV emphasized that to me and that was 40 years ago. That kind of cooperative effort, I have found that to be positive in my career and that’s what we strive to do.”

Applicants of the Berkowitz Independent Community Pharmacy Scholarship must be natural born United States citizens who have completed at least two years of study in the School of Pharmacy and rank within the top third of the class. Students must also provide a letter of recommendation from an independent community pharmacist.

For more information about contributing to the Berkowitz Independent Community Pharmacy Scholarship or to the School of Pharmacy, contact Ellen Firkins, director of development, at (804) 828-3016.