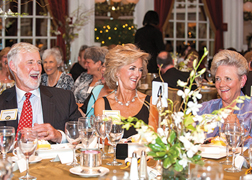 As part of the celebration of its 120th anniversary, the Virginia Commonwealth University School of Nursing recognized alumni and faculty as 120 Visionary Leaders during a gala in May at The Jefferson Hotel in Richmond, Va. Nancy F. Langston, Ph.D., RN, FAAN, ANEF, retired dean of the School of Nursing and one of the honorees, received special recognition for serving 22 years at the helm of the school. She retired this summer.

"Tonight's really not about me," Langston said in addressing the honorees. "It's about us. It's about you."

Recognizing 120 Visionary Leaders, she said, aligned with the school's anniversary. "I believe each of them would say they are but exemplars of thousands of others," she said. "There are 120 because we are 120 years old, but there are thousands who truly are visionary leaders."

A highlight of the gala was the announcement of the successful completion of the Cabaniss Leadership Challenge, the School of Nursing's $4 million campaign to raise endowed funds for nursing scholarships, professorships and projects in support of the school's mission. Two significant gifts were announced as part of the campaign:

A $1.25 million gift from the VCU Health System to establish the Nancy F. Langston Center for Quality, Safety and Innovation in the School of Nursing

A $250,000 gift from Gail W. Johnson, RN (B.S. '67; M.S. '76), CEO of Rainbow Station and chair of the MCV Foundation Board of Trustees, to establish the Gail W. Johnson Professorship for Innovative Leadership in the school

With nearly 380 guests filling the ballroom at The Jefferson Hotel, the gala raised about $100,000 for the Nancy F. Langston Fund in the VCU School of Nursing. The gala was co-chaired by Johnson and Shirley R. Gibson, RN, FACHE (B.S. '88; M.S. '90), associate vice president of nursing at the VCU Health System.