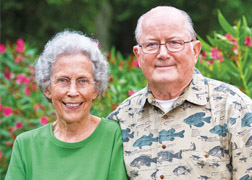 Thomas R. Poole, M.D. (M.D. ’61), grew up in a small West Virginia community. He and his family washed their clothes and their bodies in the town’s namesake, Briar Creek, and pumped drinking water out of the ground. That was more than 80 years ago.

From those humble beginnings, Poole’s path led him to medical school and to a fulfilling career as an obstetrician. Now retired and living in Palm Coast, Florida, with his wife, Kay, Poole recently alerted his alma mater that the couple has made provisions in their estate plan for a $1 million bequest. In doing so, they became members of the MCV Society. The planned gift memorializes Poole’s mentor and friend, Daniel T. Watts, Ph.D., with a scholarship fund that will support generations of students in the Virginia Commonwealth University School of Medicine.

In 1966, Watts, a nationally recognized pharmacologist, became dean of the School of Basic Health Sciences and Graduate Studies at the Medical College of Virginia. But Poole met him before that, when Watts was chair of pharmacology at West Virginia University.

“He interviewed me as I applied for medical school at West Virginia,” Poole said. “He knew I was a poor fellow and wondered how I was going to finance my family while I was in medical school. He offered me a job in his lab that would pay $300 a month for a year. That was hard to refuse. I got to know him very well. He was a man of great integrity. I couldn’t have been luckier to have that opportunity to work with him.”

Poole completed his first two years of medical school at West Virginia University before finishing his studies at MCV.

“A School of Basic Health Sciences was completely unusual in medical schools across the country at the time,” Harris said. “As dean in the late ’60s and early ’70s, Watts put together a group of fantastic faculty and associate deans. He was a brilliant manager and very encouraging of our working in the community particularly in programs to increase minority students’ interest in science.”

Under Watts’ deanship, Harris said, the school created a program that exposed high school students to on-campus lab instruction, and he advocated for the development of the Ph.D. program.

“With Watts’ help and support, we built a very large graduate and postgraduate program that has consistently received high national rankings. He was a good friend,” Harris said.

The Pooles feel fortunate to be in the position to memorialize Watts.

“I’m getting into my twilight years and want to do what I think is best because I’ve been so fortunate,” Poole said. “I thought so much of Dr. Watts who once asked me if the shoes I was wearing were the best I had. I replied, ‘They’re not only the best shoes I have, they’re the only shoes I have.’ The next day he gave me a pair of his own.”

To learn more about the School of Medicine, contact Tom Holland, associate dean for development, at (804) 828-4800 or teholland@vcu.edu.