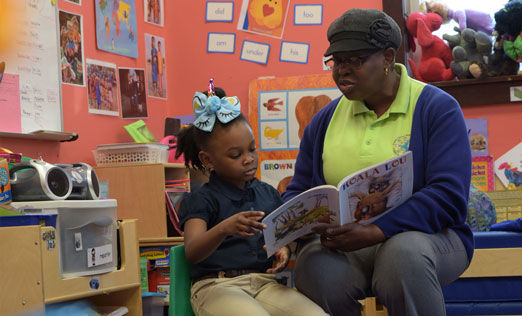 On the same page

In an age in which it’s not uncommon for preschoolers to be addicted to technology, a literacy program called ExCELL has turned Valarie Wells-Bryant’s daughter, Sophia, into a bibliophile.

If Sophia is on her iPad, her mother says it’s because she’s logging in the names and due dates of her library books.

Sophia caught the reading bug during two years in ExCELL from 2016 to 2018 at the Fifth Street Baptist Church Child Development Center in the Northside area of Richmond, Virginia. She is now an impressive student at Victory Christian Academy on Chamberlayne Road.

ExCELL – Excellence in Children’s Early Language and Literacy – aims to strengthen the early literacy component of federal Head Start programs for low-income families and the Virginia Preschool Initiative programs for at-risk children. Without the preschool literacy program, Sophia and her fellow ExCELL students could have been candidates for intervention for reading difficulties in elementary school.

The early reading program is one of three literacy initiatives operated by The Literacy Institute at the Virginia Commonwealth University School of Education, alongside The Virginia Adult Learning Resource Center and PluggedInVA, an education and career training program. The Literacy Institute was established in the School of Education in 2003 with grants and funds provided by the Virginia Literacy Foundation, with the goal of fighting illiteracy through research and programs for all ages.

ExCELL provides a literacy coach to schools that request the program. It is headed by Cynthia Hutchinson (B.S.’80/E; M.Ed.’82/E), co-director of The Literacy Institute. Schools are chosen for the program on the basis of need, she says.

“We generally work with school leaders and funding organizations to identify potential sites most in need of support,” Hutchinson says. “Funding typically comes from outside of the school systems – private foundations, nonprofit organizations such as United Way and some federal, state and Richmond city funding.”

“Sophia loved getting the books, she loved opening the books, loved the family get-together when we would read the books to her,” says Wells-Bryant, a teacher who has taught pre-kindergarten classes at Fifth Street since 2015. “And then it was her turn to read the books back to us. She would guess the words, she’d make up her own stories. It opened up a whole new world to her. Sometimes she’d go way off-story. But that was OK.”

Once a month, families at ExCELL sites are invited to a meeting to learn literacy strategies, receive materials, enjoy a free meal and child care services, and socialize with other parents. The materials include books, tip sheets on early language and literacy topics, and parent-child games.

Encouraging parents to become active participants is a crucial component of the program, Hutchinson says. “From these activities and resources, we hope that families better understand their child’s early development and their roles in supporting that development,” she says. “We’re also trying to empower the parents to have more effective conversations with teachers and be better advocates for their children. Many times, what drives good instruction is a parent saying, ‘I want to understand more; I want to know more.’”

The teachers grow to love the support, too. “They really come to depend on it because the coach is not evaluative,” she says. “The coach is truly a thinking partner and a resource to the teacher.”

The Rev. Linda Hickman-Pearson, program director of the Fifth Street Baptist Church Child Development Center, supervises eight classrooms with 108 preschoolers. Her 16 teachers and two administrators bought into ExCELL quickly during its two years at the center and attended professional development training one Saturday morning a month throughout the school year.

The children were immediately enthusiastic about ExCELL, but parents were a tougher sell when it first was introduced. “They were pretty skeptical,” Hickman-Pearson says. “Our parents are confronted with many uncertainties. We have grandparents who are raising their grandchildren. We have single parents. We have parents who work two or three jobs. So the challenge was trying to encourage them to come to meetings every way we could. We put little reminder stickers or bracelets on the children the day before the meetings.” A couple of parents attended one of the early meetings and word-of-mouth began to swell the numbers, Hickman-Pearson says.

Hutchinson says parents who respond to post-ExCELL surveys indicate that they read more with their children, go to the library more and are more engaged with their child’s classroom.

Ruth McReynolds, who was the ExCELL coach at Fifth Street and works with Hutchinson in numerous other schools across the state, says teachers have seen a positive increase in the PALS assessment. PALS – Phonological Awareness Literacy Screening – is a measure of young children’s knowledge of important literacy fundamentals that are predictive of future reading success. As ExCELL children move through elementary, middle and high schools, tracking data is becoming available to affirm the value of the program.

ExCELL’s roots can be traced to the creation of the Virginia Literacy Foundation in 1986 under the direction of Mark Emblidge, Ph.D., and Jeannie Baliles, Virginia’s first lady from 1986 to 1990. In the early 2000s, then-VCU President Eugene P. Trani, Ph.D., approached Emblidge, then-president of the state Board of Education, about strengthening the public-private partnership among the VLF, VCU and the Virginia Department of Adult Education. They agreed a family component was crucial to the literacy effort.

Between 2004 and 2012, the newly formed Literary Institute was awarded three Early Reading First federal grants that yielded about $13 million for the VCU School of Education. With these grants and philanthropic support from the VLF, ExCELL was created as a sustainable program that has operated successfully since 2008. It has now spread statewide, providing training and support to more than 206 teachers and more than 2,216 families and children, although its primary service area is in Richmond Public Schools.

The VLF supports the institute’s adult and family literacy programs through challenge grants, direct consultation and program development training. Emblidge remains director of the VLF, which has given a total of $2.8 million to support The Literacy Institute since 2007 – 86% of that since 2012, when the Make It Real Campaign for VCU launched. As a result, The Literacy Institute and its programs have grown exponentially and can make a significant impact on numerous area children and adults in a relatively short time.

Emblidge is excited and encouraged by the results of the institute’s programs, particularly the data on ExCELL. “There is a measurable difference in terms of test scores for those kids who get the parental support and the quality pre-K instruction,” Emblidge says. “When I was president of the state Board of Education, Tim Kaine was the governor, and he would say that one of the most important pieces of data in state government for him was the third-grade reading scores for kids, because there is a correlation between third-grade reading scores and dropouts. And so we would like to know by at least third grade that we have provided the foundation that these kids need in order to be successful in school.”

Andrew P. Daire, Ph.D., dean of the VCU School of Education, is a member of Virginia first lady Pamela Northam’s Children’s Cabinet on Early Childhood Development and School Readiness. He agrees with Emblidge’s assessment of the importance of The Literacy Institute’s work with ExCELL.

“One of the most important needles to move is early childhood literacy,” he says. “It’s a critical issue. We’re excited, proud and pleased to have the support from the foundation for this work because it’s not an area where there’s incredible amounts of money.

“Literacy may not be a sexy topic like cancer research or neuroscience or pharmaceutical engineering, but without early childhood literacy, we would not have individuals working in those disciplines.”

To learn more about the VCU School of Education, contact Ed Kardos, senior director of development, at egkardos@vcu.edu or (804) 828-4692.