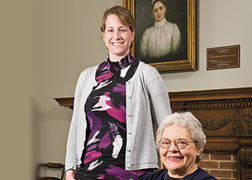 What would bring these alumnae and friends together in such a philanthropic way?

The VCU School of Nursing’s Cabaniss Leadership Challenge was established to raise $4 million for endowed scholarships and professorships, including a chair for the dean’s position, as well as funds to support the school’s mission of research, education and service. A motivating goal of the fundraising campaign is to name the School of Nursing building, which opened in 2007, in memory of Sadie Heath Cabaniss, who is considered the founding director of the School of Nursing.

The Cabaniss Leadership Challenge was officially announced at the annual Cabaniss Dinner in November. Nearly $1.3 million has been raised since July 2010.

“The Cabaniss Leadership Challenge will play a critical role to ensure our rich legacy and sustained leadership in nursing research, education and service,” said Nancy Langston, Ph.D., R.N., FAAN, dean and professor in the VCU School of Nursing. “The challenge’s success will have a transformative effect on our efforts to recruit and retain the best and brightest students and faculty and on our capability to reach even greater heights of nursing excellence.”

In a show of support, Langston made a $10,000 pledge toward an endowed chair for future VCU nursing deans and a $250,000 bequest to establish an endowed professorship to help attract and retain a VCU nursing faculty member.

“The Cabaniss Leadership Challenge grew out of an idea I had when the new School of Nursing building was under construction several years ago,” Dorsey said. “I wanted to see the name Cabaniss return to a building dedicated to nursing on the MCV Campus. As a student, I lived in the old Cabaniss Hall, and it seemed like it was time to give that name back.”

Built in 1928, Cabaniss Hall dormitory was razed in 2006 to make way for the VCU School of Medicine’s Molecular Medicine Research Building. The VCU School of Nursing’s new nursing education building, located at the corner of Leigh and 11th streets, opened in March 2007.

Cabaniss was born in 1863 in Petersburg, Va. She graduated from the Johns Hopkins University School of Nursing in 1893 and enjoyed a long career, which included work in Virginia, North Carolina, Georgia and Florida. She developed a training and certification program for nursing students and is known in the field as the founder of professional nursing in Virginia.

“The name Cabaniss is a symbol of nursing excellence here in Virginia and beyond,” said fundraising organizing committee member Kristin Filler (B.S. ’09), who is currently a Ph.D. candidate in the School of Nursing. “I was attracted to the challenge because the School of Nursing has been like a family to me. I know how much the school has helped me, and I encourage other students to give back to keep the cycle of giving going.”

To learn more about the School of Nursing, contact James Parrish, director of development, at (804) 828-5172 or jtparrish@vcu.edu.