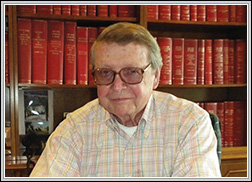 Over the years, many employees who had received leadership scholarships during their college educations enjoyed successful careers at James River.

With these truths in mind, Williams and his wife, Barbara, established the Eugene P. Trani Leadership Scholarships through the Bob and Barbara Williams Foundation to continue in perpetuity. Williams was among the corporate leaders who helped establish the Virginia Commonwealth University College of Engineering in 1996.

The new scholarships recognize Trani’s “extraordinary contribution to the school during his 19-year term as president of the university and the key role he played in growing the College of Engineering,” said Williams, who has retired. Trani retired as president of VCU and CEO of the VCU Health System on June 30, 2009.

“Barbara and I wanted to do something special to serve as a lasting tribute to Dr. Trani’s legacy at VCU,” Williams said. “His leadership and creativity have set a standard of excellence at the College of Engineering, which we hope to extend through two new leadership scholarships at VCU from our family foundation program.”

The foundation has also established multiple scholarships at other universities.

“Bob Williams’ generosity in funding this scholarship exemplifies his commit­ment to VCU engineering since its inception,” Dean Russell Jamison, Ph.D., said. “As a founding member of the engineering foundation board, he has been committed to the development of ‘business-ready’ engineers. We are deeply indebted to Bob for his strong, sustained support of students.”

The Williamses received thank-you letters from both of this year’s recipients. Robert Williams describes the students as extraordinary young people who possess all of the characteristics necessary for entrepreneurship.

Because the scholarship is sensitive to creativity, Schell feels a responsibility to give back to the university. “I also want to open up this opportunity to more kids like myself even if it’s through an organization I join later,” he said.

Senior Laura S. Kueny of Herndon, Va., was this year’s in-state scholarship recipient. She is majoring in biomedical engineering with guaranteed entrance into the School of Medicine, where she plans to explore the surgical aspects of medicine and endocrinology. Kueny spent last summer in Guatemala, providing medical care to malnourished children with the organization Nuestros Alejandros.

“I’ve never been awarded a scholarship of this magnitude before, and I hope I can live up to it,” she said. “I’m incredibly grateful to [Williams] for all he’s done for VCU.”

To make a gift to the College of Engineering, contact Ike Tucker, assistant director of the VCU Foundation, at (804) 828-6491 or witucker@vcu.edu.