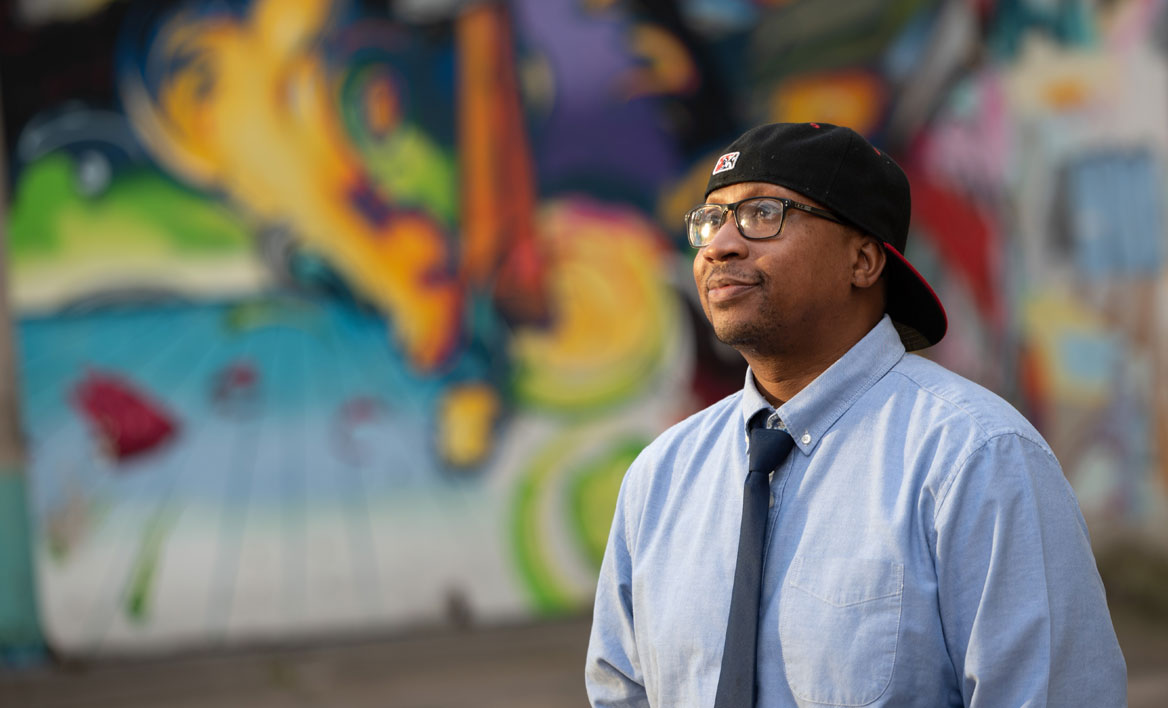 A diminutive teen in an oversize T-shirt grins proudly from the front row of a 1993 group photo taken of participants in the Connections Institute, a program for emerging high school leaders created by an inclusive communities organization.

Marc Cheatham (B.S.W.’05/SW) was just 14 and a rising sophomore at J. R. Tucker High School in Richmond, Virginia, when he was chosen by his school to attend the five-day summer workshop. The organizer, known then as the National Conference of Christians and Jews and now as the Virginia Center for Inclusive Communities, created the workshop to teach students to break barriers, to deal with biased behavior and to develop an action plan for reducing prejudice in their schools.

He didn’t know it at the time, but that summer experience would shape Cheatham’s future. Now 39, he says the lessons on inclusiveness and diversity led him to Virginia Commonwealth University, where he majored in social work and received the VCU Alumni African-American Alumni Council Leadership Scholarship in 2003.

The man friends call “Cheats,” wearing a perpetual smile and backward baseball cap, has built a career around championing the underrepresented.

He is the Richmond-based director of constituent services and casework for Sen. Tim Kaine, D-Va., a “fix-it” position. Cheatham has worked his way up in Kaine’s office since interning for the then-lieutenant governor of Virginia as a student, when the two hit it off immediately. “I can honestly say if it weren’t for Tim Kaine, I probably wouldn’t work in politics,” Cheatham says. “I don’t like it that much. I like him that much, if that makes sense.”

But politics only nicks the surface of Cheatham’s commitment to his community. He lives near his childhood neighborhood with his wife, Aria, and their 4-year-old son, Cameron.

Twenty-five years after that summer workshop, he still is active as an alumnus of the Virginia Center for Inclusive Communities. In 2011, the prolific writer, photographer and social media personality founded a blog, The Cheats Movement, which spotlights and promotes Richmond’s hip-hop musicians, street artists and community cultural groups.

The goal of The Cheats Movement is to give a journalistic voice to urban culture, which had been largely ignored by mainstream media. Its catchphrase is #weseeit – “to let people know that I was seeing the things that they were doing differently,” Cheatham says. “I was seeing our community as a different place than what was being portrayed by our local news.”

And it’s caught on.

“The number of people who came up to me or followed the stuff that we do with the blog and said, ‘You know, you’re the only place that covers this,’ was kind of shocking and surprising and, honestly, disappointing when we look at how media coverage works. I started the blog as a way to highlight some of the things that we were seeing culturally in Richmond. It was a huge void. To an extent, it still is, but it’s gotten a lot better since 2011.”

The blog spawned a popular podcast three years ago that was picked up as a biweekly daytime radio show, The Cheats Movement, on WRIR-FM 93.7. Cheatham got into his blog, podcast and radio show by talking about arts and culture but has moved on to weightier topics such as education, housing, child poverty and the Confederate statues on Monument Avenue in Richmond. Cheatham and cohost Gigi Broadway give voices to issues that otherwise might not be heard. “We talk politics, education, we talk a lot of diversity and urban culture,” he says.

The spunky Cheats is an exemplary ambassador for the VCU African-American Alumni Council Leadership Scholarship, says Rodney A. Harry (B.S.’90/H&S), president of the VCU Alumni African-American Alumni Council. The scholarship was created in 2002 to build leaders in the African-American student base at VCU, using alumni philanthropy to motivate them to achieve greatness. “He’s done so much,” Harry says. “He’s so active in the community, and he really seems to have a strong sense of wanting to move the community forward and bridge the gap between Richmond’s past and its future. He really represents what you would want this scholarship to do.”

In addition to financial aid, the scholarship gave Cheatham a boost in confidence and self-esteem. “The feeling was a giant sense of pride,” he says. “As an African-American on any college campus, I think it’s important to look for identity, it’s important to look for a sense of belonging. I remember having a really strong sense of pride to call and be able to tell my parents, my loved ones, that I was the winner of that particular scholarship.”

Linnie Carter, Ph.D. (B.S.’92/MC; M.S.’98/MC) was president of the AAAC when the scholarship was created and is a leadership scholarship donor.  “Marc Cheatham is a living and breathing example of our hope and vision for the AAAC Leadership Scholarship,” says Carter, vice president of college advancement at HACC, Central Pennsylvania’s Community College. “We need more African-American leaders in Richmond, the commonwealth of Virginia and the United States – in all sectors.”

This year, Cheatham, who served in the Marines before enrolling at VCU, was invited to participate in the AAAC Mentoring Circle, a program to connect VCU’s African-American undergraduates with alumni who have shared professional interests. The mentors help open doors to internships, apprenticeships or employment opportunities.

“It’s a great, great source of pride to be able to tell my mentee through this program that, ‘Hey, I was where you were,’” Cheatham says.

He also serves on the advisory board of the Institute for Contemporary Art at VCU.

“There are so many opportunities for alumni to get connected back to the university, even if you’ve been away for a long time,” he says.

“This is an enormous source of pride for us,” Angell says. “By giving to scholarships, donors send students the signal, ‘I believe in you.’ That confidence that we give through those gifts has ripple effects on the rest of society, because a student like Marc goes on to make a mark on the world. We’re just so grateful to the African-American Alumni Council for their support and recognition of Marc.”