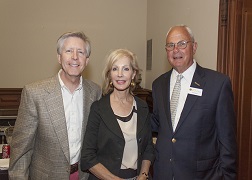 Cabell Library board preserves, inspires and invests in future

After a prolific career touched with controversy and marked by wide admiration, acclaimed Richmond author James Branch Cabell left a distinctive literary legacy and a 52-volume body of work at his death in 1958.

Many of his peers, including Mark Twain, Sinclair Lewis and fellow Richmonder Ellen Glasgow, lauded his writing. Current British graphic novelist Neil Gaiman has cited Cabell as an important influence and has said Cabell’s style and voice could be considered precursors to the fantasy fiction genre.

Margaret Waller Freeman Cabell, his widow, donated his personal library and papers in the late 1960s to the newly formed Virginia Commonwealth University. Additionally, she helped establish the James Branch Cabell Associates Board during the infancy of VCU Libraries.

Today, the James Branch Cabell Library on the Monroe Park Campus bears not only Cabell’s name but also his legacy of literary inspiration through the careful preservation of his work. And it’s been the duty of the Cabell Associates to keep the legacy alive ever since.

“Margaret Freeman helped create the Cabell Associates to safeguard her husband’s work,” said Walter Dotts III, president of the Cabell Associates. “Their home on Monument Avenue was also given to the board and its sale gave us a footing to support the libraries and to promote Cabell as an important Southern writer. I don’t think he’s ever gotten the recognition he deserved. That’s part of our purpose.”

While preservation is critical to the group, progress is equally significant.
The Cabell Associates recently made a lead gift of $100,000 to VCU Libraries’ new building fund.

“We felt very strongly about being one of the first private donors to be supporting the new library,” Dotts said. “A great university needs a great library.”

Additionally, eight years ago, the Cabell Associates became a co-sponsor of the VCU First Novelist Award. With the sponsorship, the award was renamed the VCU Cabell First Novelist Award and is now a nationally recognized literary prize that helps keep Cabell’s name in front of important literary audiences.

For more than 45 years, the Cabell Associates have been a resource not only for VCU but also for the community. The group helps connect those with materials to donate with Special Collections and Archives.
“The Cabell Associates have been vital to VCU Libraries almost from the
moment we opened our doors,” University Librarian John E. Ulmschneider said.

“Their leadership in philanthropy is deeply appreciated. We hope their example will set a foundation of giving by others in the Richmond community.”

Private philanthropy has been the mainstay of VCU Libraries, Ulmschneider said, and these gifts are particularly critical to meet the $10 million goal in private funds, which will supplement the state’s funding for the new building.

The Cabell Associates, he said, helped form the nucleus of academic pursuit at the university through the establishment of what is now one of Virginia’s busiest libraries.