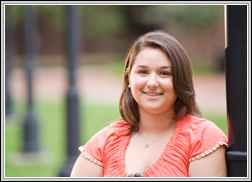 Though she’s only 19 years old, Virginia Commonwealth University sophomore Samantha Jacobs has a clear sense of direction. She knew as a high school student in Bethesda, Md., that she wanted to pursue a career in community health education, and now she’s following that dream at VCU.

Jacobs’ passion for public health began when she got a job as an assistant in the Bethesda dental office of Dr. Usa Bunnag. Before long, Jacobs began tackling administrative tasks for the nonprofit organization that Bunnag founded, Smiles on Wings. The group was established in 2003 to fund and organize dental and medical humanitarian missions to Bunnag’s native Thailand. In the summer of 2006, Jacobs joined Bunnag on one of her medical and dental missions. Before leaving, Jacobs held a Beanie Baby drive at her high school, collecting more than 800 toys to take to the kids she would encounter in Thailand.

During her three weeks in Thailand, Jacobs saw firsthand how much of a difference she could make.

“It was really like something out of National Geographic — huts on a mountainside. I could not fathom that this was actually how someone else lives,” Jacobs said. “But it was an important realization for me.”

A standout in high school, Jacobs received the Deans’ Scholarship for the 2007-08 academic year as an incoming freshman. As an out-of-state student, that made VCU more appealing.

Both of Jacobs’ parents, Philip H. Jacobs (B.F.A. ’79) and Marjorie Lee Jacobs (B.F.A. ’78), are VCU graduates, and she said she has always loved Richmond and VCU’s urban campus. But the deciding factor in Jacobs’ choice to come to VCU was the community health education concentration in the School of Education’s health, physical education and exercise science degree program. After learning about the program, Jacobs called Joann Richardson, Ph.D., an associate professor in the school’s Department of Health and Human Performance, and became even more excited about the program.

Now Jacobs also has earned the School of Education Alumni Board Scholarship for the 2008-09 academic year.

“The School of Education Alumni Board is a committed group of alumni who work to help further the mission of the school through outreach and fundraising activities, including an annual golf tournament, grant-writing workshop and annual alumni awards event,” said Magnus H. Johnsson, executive director of external affairs and development for the School of Education.

The scholarship was created in 2000 to provide aid to deserving graduate and undergraduate education students, he said.

“Scholarships are such a motivating factor,” Jacobs said, explaining that earning a scholarship drives her to succeed — to show that the investment in her education was worthwhile. “VCU wants me to be an exceptional student here and has given me the chance to do that.”

For more information about making a donation to the School of Education, contact Magnus H. Johnsson, executive director of external affairs and development, at (804) 827-1363 or johnssonm@vcu.edu.