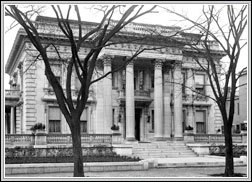 Built for Frederic and Elisabeth Scott in 1911, the house at 909 West Franklin Street is among the most respected projects by the eminent Richmond architectural firm, Noland and Baskervill. Both architecturally and historically significant, the Scott House reflects the prosperity of early 20th-century Richmond, when the city was one of the principal insurance and banking centers of the South. Virginia Commonwealth University purchased the house in 2001 from the children of Elisabeth Scott Bocock — the daughter of Frederic and Elisabeth Scott and last member of the Scott family to live in the house. Bocock was dedicated to preserving and reclaiming many of the 18th- and 19th-century homes in Richmond, notably by founding the Historic Richmond Foundation.

The Scott House, now a Virginia Historic Landmark, is one of Richmond’s most important architectural survivors from the great age of American patronage called the American Renaissance (1876-1914). The house’s exterior is patterned after the Petit Trianon at Versailles. Like other American Renaissance dwellings, the first floor of the Scott House resembles an architectural museum, with rooms in many different styles, each style having been chosen for its association with the function of the room. The entry hall and drawing room pay tribute to 18th-century France, famed for the refinement of its social life; the library cites the Gothic Era, a great age of learning; the dining room follows the Adamesque taste of the late 18th century, when Britons developed the modern dining room; the Renaissance den evokes the studies or studioli of 15th- and 16th-century Italy; and the conservatory is decorated with a Pompeian bacchanale, which completes the set of styles.

The university is currently preserving the first level of the Scott House and has made it available to the Richmond community in a manner similar to that of other local historical buildings, such as the Virginia Museum’s Center for Education and Outreach and the Woman’s Club of Richmond’s Bolling Haxall House. VCU will create sophisticated, yet functional, spaces that reflect the grandeur of the American Renaissance, while basing the design schemes on the architecture of the original dwelling and information available through surviving documents that record the original appearance.

VCU commenced its restoration project in 2001 with a complete overhaul of the building’s fire safety, heating and cooling, and electrical capabilities. In 2003, internal budget allocations and a $50,000 grant from a private Richmond-based foundation allowed the university, under the direction of interior designer Gary Inman (M.A.’93), to begin Phase I of the restoration process: wall, ceiling and floor repair; woodwork and cabinetry restoration; bathroom and kitchen modernization, and decorative painting throughout the public areas of the house. Phase II includes hard and soft furnishings such as core furniture pieces, wall and floor coverings, and window treatments. Phase III, planned for 2006-08, will include additional period detailing, artwork, lighting, furniture and structural enhancements.