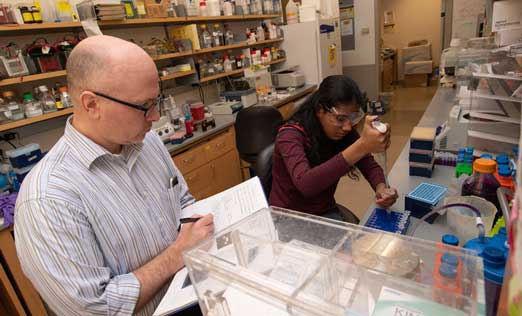 After several years studying a protein that suppresses the immune system’s response to cancer, a group of VCU Massey Cancer Center researchers is on the cusp of a breakthrough that could improve the effectiveness of common chemotherapy treatments.

“The human immune system has developed ways to detect and fight cancer cells, so in order for a tumor to form, the cancerous cells have to find ways to avoid being detected by the immune system,” Landry explains.

Understanding how cancer cells accomplish this has become the focus of Landry’s lab. In 2016, his team pinpointed a common immune-suppressing protein complex called the nucleosome remodeling factor. Research has shown that inhibiting the NURF complex slows tumor growth and helps the immune system fight back. Now, in collaboration with researchers at the University of Minnesota, Landry’s team is applying everything they’ve learned about the NURF complex to develop new immunotherapy drugs that control tumor growth.

The drugs have worked on melanomas and breast cancer so far, indicating a possibility that the new immunotherapy treatment could be applied to other types of cancer and could help even more people.

“We’ve also found that the drugs we’re studying synergize with common standard-of-care chemotherapy treatments like doxorubicin and paclitaxel to make cancer cells more sensitive to treatment, so the benefit to patients is twofold,” Landry says.

His latest research looks at how the new immunotherapy drugs can work with chemotherapy treatments to improve patient outcomes. But securing funding to expand on his discoveries has been a challenge, Landry says. His team has submitted several grant proposals based on their findings that, although highly rated, were not selected to receive federal funding.

A major source of funding for cancer research comes from the federal government via grants from the National Institutes of Health and the National Cancer Institute. Like other aspects of government spending, federal research grants are limited by a budget. That budget has stagnated over the past decade, and spending is struggling to keep pace with the increasing complexity and cost of medical research.

“Gaps in funding are so common now,” Landry says. “There used to be enough funding to offer grants to the top 25 or 30 percent of proposals, but now it has dropped to less than 10 percent. Even if you are lucky enough to get a grant, the funding amounts are significantly reduced from what they once were.”

Researchers whose proposals do not receive federal funding have no choice but to end their projects and abandon potential breakthroughs. That is, unless they can secure privately sourced bridge funding to fill in the gaps.

Landry’s immunotherapy developments have continued with aid from bridge funding provided by the Virginia Moose Association, a fraternal and service organization that first pledged its support for Massey in 1987.

“Over the years, many of our members have been affected by cancer in one way or another so our organization decided to take a stand against it,” says Virginia Moose Association member Troy King. “With Massey Cancer Center right in the heart of the commonwealth, we knew we wanted to build a relationship there.”

A division of the international Loyal Order of the Moose, the Virginia Moose Association consists of 85 lodges (for men) and 65 chapters (for women) across the state. Each lodge and chapter manages fundraising activities throughout the year to contribute to the organization’s preferred charities, which include Massey Cancer Center and Special Olympics Virginia locally, in addition to several charities supported by Moose International.

The Virginia Moose Association established the Virginia Moose Cancer Research Fund at Massey in 2001, and over the years, its members have raised and donated nearly $1.8 million to support Massey researchers. Fund expenditures include salary support and provide protected time for researchers serving as principal investigators.

Bridge funding from the Virginia Moose Cancer Research Fund helped Landry continue building on his research to increase his likelihood of securing a federal grant in the future. Last November, the NIH rated his most recent grant proposal among the top 3 percent of submissions with a score that is likely to earn funding in 2019, Landry says.

“As long as you are able to keep generating preliminary data, you are able to show the progress of your work,” he says. “If you can’t show progress, you have no chance of securing a grant in subsequent cycles. Without funding, a lot of innovative projects could fall to the wayside so having supplementary funding mechanisms is critical to keep them alive.”

The Virginia Moose Association members are eager to do what they can to help others, King says, and the group hopes to soon surpass $2 million in total giving to Massey.

“Our goal is for the fund to help provide Massey with whatever is needed to support their researchers,” King says. “Their work is so important and must continue.”