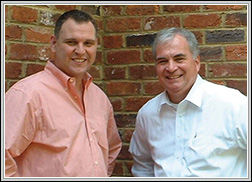 Glenn Duncan (B.A. ’04; M.S. ’06) knows the power of scholarships. As an under­graduate student at Virginia Commonwealth University, Duncan received the Julia Halley Latane Scholarship and the VCU Affinity Scholarship. He hoped to one day pass along the same opportunity to other students.

“I was very thankful,” Duncan said. “I immediately sent a thank-you letter and got one back.”

Last year, he realized his goal by establishing two annual scholarships that are now encouraging recipients to think about how they want to give back later.

The Glenn Duncan Scholarship is awarded annually to a sociology student in the College of Humanities and Sciences’ L. Douglas Wilder School of Government and Public Affairs; and the Climb Advertising Scholarship, named after Duncan’s new company, is given annually to a Brandcenter student. This year, student winners will receive $500 each.

This year’s Glenn Duncan Scholarship recipient is Heather Condon (B.A. ’08). After earning a bachelor’s degree in women’s studies from VCU in May 2008, she began her graduate studies in sociology that fall.

Condon looks forward to passing along the same opportunity to other students.

“I am grateful for the scholarship and appreciate the kindness of alumni,” Condon said. “Richmond and [the university] have been a won­derful influence on my life, and I hope in the future to be able to give back to VCU.”

Duncan had a similar experience at VCU, with his academic mentors making an indelible mark on his life and his career.

With a bachelor’s degree in sociology and anthropology, he contemplated gradu­ate school but wasn’t sure what path to take. Duncan’s academic adviser, sociol­ogy associate professor John Mahoney, Ph.D., suggested how to combine his desire to improve society and help others with his interest and experience in the business world.

“Glenn wanted a major that would help explain the existence of social problems and suggest ways of alleviating them,” Mahoney said. “But he also demonstrated a practical, applied approach to life. I recommended that he look into VCU’s nationally recognized Adcenter, now the Brandcenter.”

Duncan took Mahoney’s words to heart, earning a Master of Science in Mass Communications with a concentration in advertising strategy in 2006. He immedi­ately went to work for an ad firm in Richmond, Va.

This past February, Duncan and a partner formed their own agency, Climb Advertising. Before getting started on the venture, Duncan sought the advice of VCU Brandcenter professor Peter J. Coughter.

“At VCU, the professors are your professors even after you’ve graduated,” Duncan said. “I wouldn’t be here now with my own agency without the advice I received.”

Mahoney calls his former student one of the most generous people he has met in 25 years of teaching.

“Glenn did not forget VCU and, true to his generous character, has donated financial support to students,” he said. “[These scholarships] are one way of giving back to the organizations that have helped him achieve his own success in life.”

To make a gift to the College of Humanities and Sciences, contact Lois Badey, director of development, at (804) 827-0856 or labadey@vcu.edu.