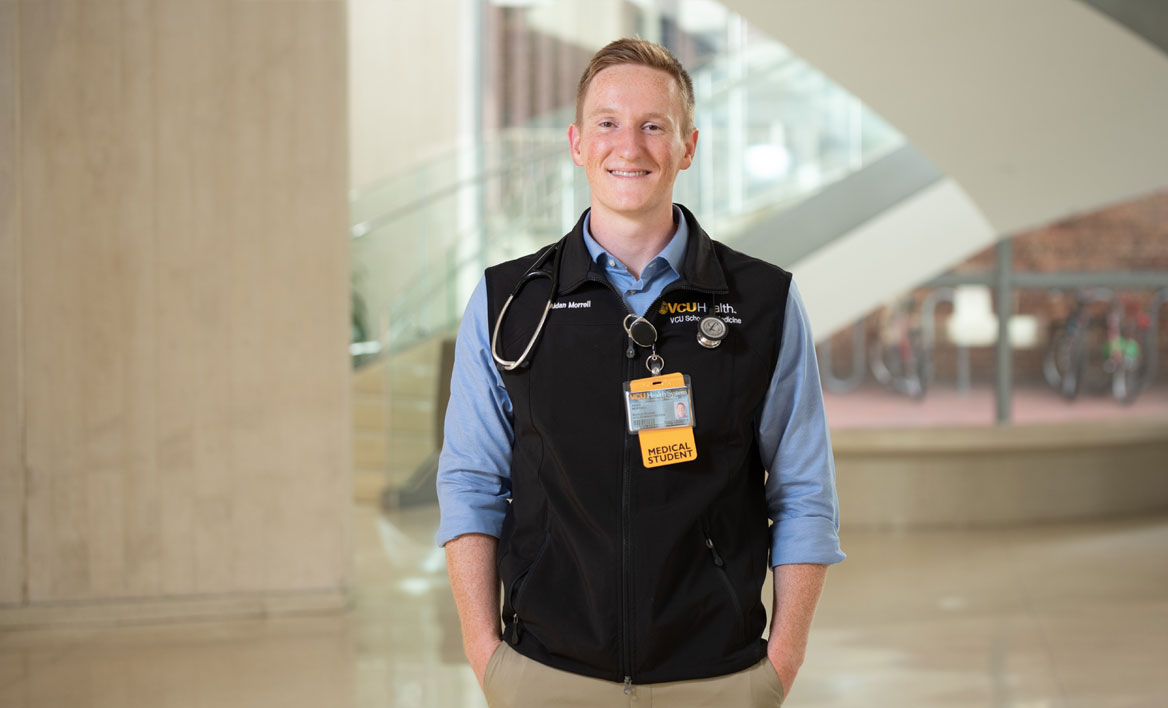 Aidan Morrell’s path from tending animals on his family’s Prineville, Oregon, farm to researching how to prevent infections after joint replacement surgery as a Virginia Commonwealth University School of Medicine student wasn’t easy.

Morrell was an academic success, graduating as a high school valedictorian and earning a biochemistry degree from his hometown college, George Fox University.

But family assistance and funding for his dream of a medical career were hard to come by. “I came into medical school interested in orthopaedics, but there are no doctors in my family,” Morrell says. “Trying to figure out what factors are important in choosing a career path and specialty has been a pretty steep learning curve.”

Morrell interviewed at a number of medical schools and was particularly impressed by VCU. He applied and was accepted.

He and his wife, Sierra, moved across country and settled into a small apartment near the MCV Campus. The School of Medicine provided career counseling and advice on choosing a specialty, but finances remained a concern. “The prospect of student debt is kind of this ominous feeling that’s constantly in the back of my mind,” Morrell says. He is now in his third year at the School of Medicine, where out-of-state tuition is more than $57,000 annually. “It’s a reality once you’re actually signing the loans.”

Morrell remembers the exact date — July 3, 2018 — when his fortunes changed. While working in a lab, he glanced at his email and found a message from the medical school financial aid office that began, “Congratulations.” He had been awarded the Penroase S. Forman Scholarship for academically talented, economically disadvantaged students in the School of Medicine.

The Forman Scholarship was established in 1983 by the late Mildred Brynberg Forman, M.D. (M.D.’34/M), in memory of her father, who aspired to be a doctor but couldn’t afford to pursue his dream.

“At first, I thought it was a mistake because I hadn’t applied for anything,” Morrell says. “But when I confirmed it, my wife and I were both just super thankful and really excited. Getting a scholarship has been a really big blessing.”

Receiving the renewable scholarship also enabled Morrell to delve deeply into orthopaedic surgery, the specialty he would like to pursue. The funds help give him more opportunities to attend medical conferences, where he learns cutting-edge research from top orthopaedic specialists and networks with other medical students.

It also meant that his wife, a technician at Sheltering Arms Physical Rehabilitation Center in Richmond, could return to school. She was accepted into VCU to study physical therapy this past spring.

“The scholarship was really a big thing for us as a couple,” Morrell says. “It helps us feel more sure about going to school at the same time, and that helps our relationship and our stress levels.”

Peter F. Buckley, M.D., dean of the School of Medicine, says Mildred Forman’s tribute to her late father stands as an early model of the school’s outreach mission. “As dean of the medical school, I feel strongly that it’s our responsibility to make sure financial obstacles don’t close the door on a student’s dream of becoming a physician,” he says. “Dr. Mildred Forman was grateful she had the chance to follow her ambitions, so she’s given academically excellent students who face financial challenges a helping hand through this scholarship.”

Buckley says that in the Class of 2018, half of the students with debt graduated with educational debt of $200,000 or more. This year’s incoming class received a third more than prior years in scholarship funds. “This is very encouraging, though our medical students need and deserve more of our support,” Buckley says.

“Generosity like Dr. Forman’s helps,” he says. “It’s why we launched the 1838 Campaign: to build the medical school’s scholarship endowment into a fund on par with our peer schools so that we can recruit talented applicants, reward excellence and reduce student debt. Scholarships like the one Aidan Morrell holds are life-changing.”

Morrell says the scholarship has had a validating effect. “It’s just really encouraging to feel like you’re noticed and not just another face in the crowd,” he says.

He is inspired by Forman’s story of using one’s good fortune to help others realize their ambitions.

“It’s a good reminder that I’m here to help as many patients as possible,” Morrell says. “And it’s encouraging to remember that in the future, I might have the opportunity to use my own resources to make a big impact on another student’s life.”

To learn more about the Penroase S. Forman Scholarship or the 1838 Campaign, contact Amy Lane, Ph.D., director of major gifts in the School of Medicine, at (804) 827-4937 or amy.lane@vcuhealth.org.