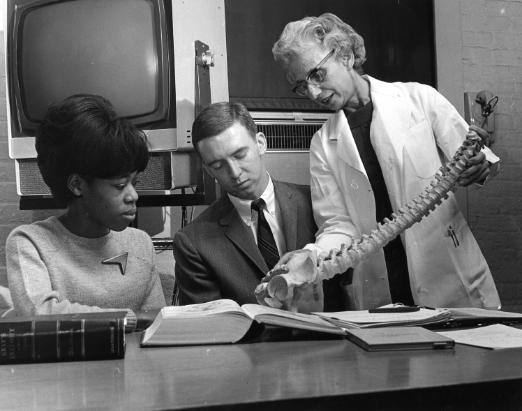 “From the seventh grade, I wanted to go into physical therapy,” he says. “After seeing the therapy that helped my father mobilize himself, I wanted to help people walk again. It had a huge impact on me and what I wanted to do.”

But as he searched for a way to attend graduate school at VCU and pursue his dream of becoming a physical therapist, he realized he was going to need some help.

“Early on, as an undergraduate at William and Mary, I was on an academic scholarship, then I converted to a football scholarship,” Wilkins says. “So coming into graduate school, I was on my own. It seemed a little daunting, but I knew there was a light through the tunnel. I’d be able to survive and support myself.”

A scholarship from the Sue Hirt Fund enabled Wilkins to focus on being a full-time physical therapy student.

“The scholarship helped pay my rent, buy food and provide essentials such as clothing. I dedicated my time to school because of the help it provided.”

Sue Hirt, RPT, M.Ed., was a teacher who made an astounding dif­ference not only in students’ lives but also to an entire profession.

As chair of what is now the Virginia Commonwealth Univer­sity College of Health Professions’ Department of Phys­ical Therapy from 1948 until her retirement in 1982, Hirt “was largely responsible for establishing [the department] as one of the premier programs in the country,” wrote former Chair Thomas Mayhew, Ph.D. (Ph.D.’91/M), in a 2007 alumni newsletter.

Throughout her long career, Hirt was recognized with awards and honors, including the 1981 Mary McMillan Lecture Award from the American Physical Therapy Association.

“I happened to be attending my first APTA annual conference in 1981,” Mayhew wrote. “I was still in physical therapy school, and I remember this small, distinguished woman speaking so forcefully and eloquently about the profession. She was a great supporter of our program.”

Hirt was also a great supporter of her patients, and she con­tinued to treat them long after her retirement. But she is perhaps best remembered for her motivating and attention-grabbing teaching techniques.

“She walked up and down the aisles and back and forth through the classroom, and she would suddenly turn around and address a question to the student who happened to be in front of her,” Shoaf said. “So the students were always following what was being said, developing the ability to think through problems.”

After Hirt retired, she established a fund in the physical thera­py department with $4,000. It was used at the chair’s discretion to cover the cost of books, tuition and other student needs.

Today, the Sue Hirt Fund stands at $560,000, with gifts to the fund from four decades of her students.

“She was so beloved by her former students,” says Cecil B. Drain, Ph.D., CRNA, FAAN, FASAHP, professor and dean of the VCU College of Health Professions. The fund contri­butions, he says, are a tremendous display of respect.

Margaret Hukill (B.S.’49/AHP; M.S.’57/AHP) was one of Hirt’s grateful students and one of the more recent contributors to the fund. After Hukill’s death in 2014, the Sue Hirt Fund received a $45,270 gift annuity from her estate to help further the work of the department through student support.

“I’d venture to say that approximately 200 to 250 students have received awards since [the fund’s] creation,” Drain says. “This endowment fund allows us to help students in their hour of need.”

Award amounts vary and are considered on a case-by-case basis.

As for Wilkins, his determination and focus paid off. After clinical experiences in Virginia specializing in spinal cord injuries and rehabilitation, he turned his attention to leadership and now serves as the chief operating officer of Raleigh General Hospital in Beckley, West Virginia.

“I realized I could do more and help more people by serving in a leadership role,” he says. “My health administration degree opened my eyes and helped me see a broader picture in health care.”

Wilkins is thankful for the financial help he received at VCU, which he credits for his ability to impact the lives of many, from patients to colleagues.

He is only one one of hundreds of VCU physical therapy scholarship recipients who have been able to fulfill a professional dream through the generations of gifts to the Sue Hirt Fund.

To learn more about the College of Health Professions, the Department of Physical Therapy and the Sue Hirt Fund, contact Debra Ropelewski, associate dean for financial operations, at (804) 828-7247 or daropele@vcu.edu.