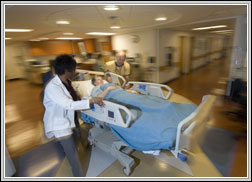 James Sanderlin did not hesitate to say yes when Dr. George W. Vetrovec asked for his help.

“Helping George is a privilege,” Sanderlin said. “He certainly has helped me. In fact, he may well be the reason I’m here to be asked.”

Seven years ago, Vetrovec repaired two blocked arteries in Sanderlin’s heart. Then in September 2004, Vetrovec, director of the Virginia Commonwealth University Heart Center, asked Sanderlin to serve as chair of The Next Generation: Campaign for the VCU Heart Center. The campaign’s goal is $10 million.

Sanderlin, who is head of the law department at Dominion Resources, did not have any fundraising experience, but he did have 30 years under his belt as a trial attorney.

“So I was used to asking people for things,” he said.

Thanks to the generosity of some loyal Heart Center supporters and “one great donor,” Sanderlin has not had to do a whole lot of asking just yet.

At a December meeting of the Heart Campaign Advisory Council, member Stanley Pauley announced that the Pauley Family Foundation would donate $5 million to the cam-paign. The center now will be called the VCU Pauley Heart Center.

“Everyone in the room was speechless,” Sanderlin said. “And believe me, speech-lessness is rare in a group of fundraisers. It was just such a wonderful surprise.”

Pauley, chair and CEO of Carpenter Company, is a longtime supporter of VCU, serving as trustee of the College of Engineering Foundation and as a member of the Founder’s Society.

A former Heart Center patient, Pauley said he was impressed with the entire staff’s dedication and care.

“They are doing a great job in making a difference in peoples’ lives,” Pauley said. “Their technical prowess is exceptional, and the intention of the gift is to extend their capabilities by expanding the staff and providing sufficient assets to keep up with rapidly changing technology needed to treat heart diseases.”

With 64 million Americans — almost one-fourth of the population — battling cardiovascular disease and more than 930,000 of them dying from the disease each year, gifts such as the one from the Pauley Foundation are essential to winning the fight against our nation’s leading cause of death.

“We are incredibly fortunate to have such generous philanthropists in our com-munity like Stanley and Dorothy Pauley,” said Eugene P. Trani, Ph.D., VCU president and president and chair of the VCU Health System. “The Pauley Heart Center will be a very visible and lasting legacy, and I am confident that many people with cardio-vascular disease will benefit from their gift.”

But, Sanderlin said, the campaign still has a long way to go before it is a total success.

“We launched this campaign in a tough market,” he said. “With several natural disasters and some very visible local campaigns appealing to donors, it’s a challenge for everybody. But we have a good message, and that is what makes all the difference.”

For more information on the VCU Pauley Heart Center and The Next Generation Campaign, contact the MCV Foundation’s Sharon Larkins-Pederson at (804) 828-4599.