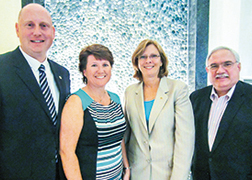 Donald F. Brophy, Pharm.D. (M.S. '04), has been named the first Nancy and Ronald McFarlane Professor of Pharmacy in the Virginia Commonwealth University School of Pharmacy. Brophy currently serves as chairman of the school's Department of Pharmacotherapy and Outcomes Science and is a professor of pharmacy and medicine.

Nancy (B.S. '80) and Ron McFarlane (B.S. '80) established the professorship in 2008 in recognition of the education they received at the School of Pharmacy. They established their business, MedProRx Inc., in Raleigh, N.C., in 2002.

A specialty infusion pharmacy, MedProRx focuses on treatment for bleeding, autoimmune neuromuscular and rheumatologic disorders and other chronic conditions. Brophy's primary research, which he has presented nationally and internationally, is in the areas of thrombosis, hemostasis and blood coagulation disorders in special populations.

"I appreciate that the school gave me a chance at a career in pharmacy," Ron McFarlane said. "The dean of admissions at that time, Eugene White (B.S. '56), probably took a calculated risk by admitting me in the first place. Nancy and I both appreciate the opportunities the School of Pharmacy afforded us. We're excited and happy to help."

Professors in the School of Pharmacy are accomplishing a lot in the realm of research, as well as educating future pharmacists, Ron McFarlane said. The two are not mutually exclusive, he noted. "It's all about what research does in the community, how it helps shape the way health care is delivered in the community."

"If people ask why I care [about research], I would say that ultimately it is going to help my grandma better manage her blood pressure," he said.

The McFarlanes hope to fund additional professorships and to encourage former classmates to consider the school in their planned giving. "Everyone can make an impact by giving back," he said.

Outright gifts to the annual fund support current needs such as student scholarships, while planned gifts, such as bequests or insurance policies, can secure the future of the school.

"As state funding for higher education continues to decline, we as alumni can ensure that today's pharmacy students are receiving the same high-quality experience that we did as students," Ron McFarlane said.

Professorships can honor or memorialize faculty, family or friends, said School of Pharmacy Dean Victor Yanchick, Ph.D. Among the areas that might be of interest to potential supporters, he said, are community pharmacy practice, geriatrics, infectious disease, cancer, pediatrics and pharmacogenetics.

Brophy, who originally joined the faculty in 1996, speaks highly of the McFarlanes, both professionally and personally.

"They have done extraordinarily well," he said, "and they are very nice and awfully warm. I am very much honored by the professorship."

To learn more about the School of Pharmacy, contact Ellen Leverich Carfagno, director of development, at (804) 828-3016 or emcarfagno@vcu.edu.