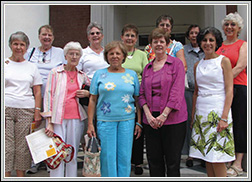 CLS alumnae create innovative ways to give back

In April, alumna Janet Coon (B.S. ’59) returned to campus for the first time in two decades. Coon was one of three former medical technologists from MCV Hospitals who visited the Virginia Commonwealth University College of Health Professions to mark their 50th graduation anniversary. The visit rekindled her affinity for her alma mater.

Coon meets monthly for lunch with a group of fellow medical technologist retirees, most of whom are also alumni. When it was her turn to organize the lunch this past July, she remembered her campus visit in April and arranged for her friends to visit the school. Teresa Nadder, Ph.D., CLS, MT, chair of the VCU Department of Clinical Laboratory Sciences, welcomed the group by introducing them to faculty and helping them reunite with old friends in the department.

During the visit, alumna Doris Costley (B.S. ’71) revealed that she made provisions for a gift to VCU in her will. Costley, whose degree is in medical technology, the clinical laboratory sciences predecessor, worked as a medical technician for 22 years. Her son, Justin (B.S. ’04), earned his undergraduate degree from the VCU College of Engineering. Costley designated her bequest to benefit the Department of Clinical Laboratory Sciences and the College of Engineering.

Hearing about such generosity, paired with an exciting day at the school, sparked more ideas among the group for ways to help support the department.

For the past three years, the group of friends has skipped exchanging holiday gifts, instead pooling money to make a donation to a local charity. This year, Coon said, the group will make a gift to their alma mater.

In addition to helping the department monetarily, Coon hopes to spread the word about careers in the field, which is experiencing a shortage of trained workers. Clinical laboratory scientists play a vital role in patient diagnosis, Coon said, but they work mainly behind the scenes. Laboratorians operate complex equipment and analyze, among other things, fluids and tissues.

“We have always felt that we were such a major part of diagnosis, and the patients never really knew about us,” she said.

After working 28 years in the field, Coon realized the skills she acquired had inadvertently prepared her for a second career. Her interest in politics, coupled with her abilities to trou­bleshoot, set priorities and organize, landed her the position of deputy general registrar of Richmond, Va., from 1987 to 1991 and then general registrar of Henrico County from 1991 to 2004.

Coon recently found a way to merge both of her interests by bringing together Del. John O’Bannon (M.D. ’73) and department chair Nadder to talk about pushing for statewide licensure for clinical laboratory scientists via the American Society of Medicine. Talks are in progress, Nadder said.

“Licensure in Virginia would ensure that only certified laboratorians would work in clinical labs, which protects the community from medical errors,” she said.

To make a gift to the College of Health Professions, contact Jessica Gurganus, senior director of development, at (804) 828-3269 or jfgurganus@vcu.edu.