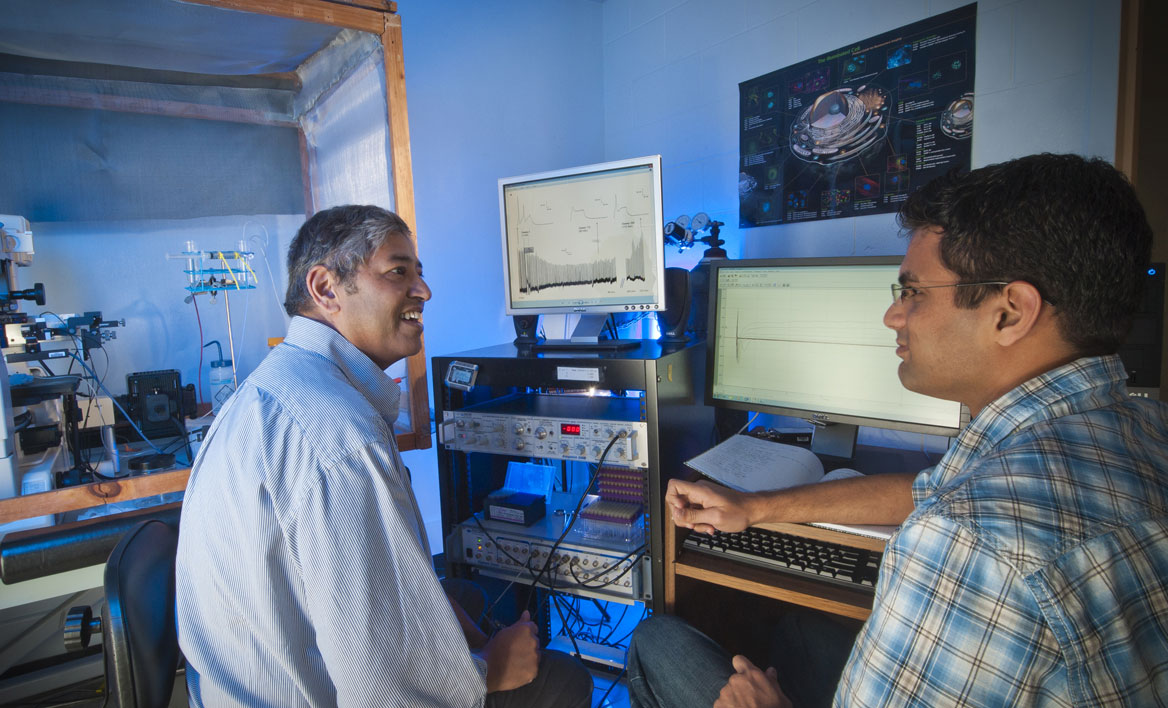 Hamid Akbarali, Ph.D., keeps a plaque on his wall in the VCU School of Medicine’s Department of Pharmacology and Toxicology. It displays the 10 commandments of mentorship, including how best to communicate with, be accountable to and nurture mentees.

As the Harvey B. and Gladys V. Haag Professor of Pharmacology, Akbarali is not only changing the face of biomedical science one student at a time through his passion for mentorship, but he’s also addressing one of the most insidious problems in medicine today: the opioid crisis.

Named professorships and endowed chairs enable faculty members like Akbarali both to achieve excellence in their roles and memorialize influential figures on campus.

“It is enormously fitting that an award-winning faculty member like Dr. Hamid Akbarali holds the professorship today. He embodies so many of the fine qualities that were admired in Dr. Haag,” School of Medicine Dean Peter F. Buckley, M.D., says. “This endowed fund and others like it are an enormous benefit to the medical school because they provide essential resources that further the work of more than seven dozen physicians and scientists.”

The professorship, Akbarali says, enables him to balance the many hats he wears.

“It frees up money; that money supports my salary,” Akbarali says, “and that allows me to do the research, teaching and service I provide.”

“Thou shalt not make grad students clones of yourself,” reads one of the “commandments” on Akbarali’s office wall.

Former student Aravind Gade, Ph.D. (M.S.’12/M; Ph.D.’15/M), says his experience with Akbarali is testa­ment to that. He notes that the professor, who has won numerous accolades for his service and mentorship, lets stu­dents make their own decisions, while he provides support.

“He always asked us which direction we wanted to go in,” Gade says. “Then he guided us on how to get there.”

Gade, now a Cornell University postdoctoral associate, began his pursuit of pharmacology in 2010 with little previ­ous research experience in the field. He worked closely with Akbarali throughout his years at VCU. Akbarali let him grow at his own pace and provided hands-on mentorship.

“Dr. Akbarali was a father figure to everyone in the lab,” Gade says. “He took the stress out of school. He helped us with more than research; he kept everything together in our lives.”

Akbarali’s dedication to letting students discover their own path is one reason his students have pursued research questions beyond pharmacology and toxicology, Gade says. The professor provides encouragement and counsel no mat­ter what direction they take.

“My goal is to make the students do critical thinking,” Akbarali says. “If I can nurture that, they’ll be successful.”

As director of the VCU Initiative to Maximize Student Development research training program in the medical school’s Center on Health Disparities, Akbarali extends his mentorship to students who are underrepresented in the bi­omedical sciences. The program, designed to prepare under­graduate students for graduate study, offers scholars a series of mentored research experiences with leading VCU faculty members from the end of their freshman year through their senior year. The scholars, who are paid a stipend during their research experience, also have the opportunity to present their work at local, regional and national research meetings.

The program is important, Akbarali says, because minor­ity students are less likely to pursue advanced degrees in the sciences. National data show that the number of underrep­resented students entering graduate school is low. A lack of role models and mentors is one obstacle those students face, and that’s where the IMSD program can play a vital role. “The goal of a mentor is to identify where and how they can help in developing someone’s career,” Akbarali says. “Probably one of the most fulfilling aspects of the program is seeing the students make great strides beyond academics.”

Akbarali’s reputation as a sterling mentor, however, arguably comes second to his role as one of the nation’s top diges­tive-science researchers. His current lab work has the poten­tial to help scientists better understand what causes opioid addiction and how to find alternatives to the drugs.

Recent research by Akbarali and William Dewey, Ph.D., chair of the Department of Pharmacology and Toxicology, found that opioid addiction is exacerbated by the negative effect opioids have on the bacteria and other microbes inside the gut.

Opioid use increases the amount of harmful bacteria in the gut and causes the breakdown of the epithelial barrier, which protects the wall of the colon from bacteria. When that happens, the body produces cytokines.

Cytokines are particularly dangerous, because they can cause neurons to develop greater tolerance to the pain-numbing effects of opioids. This is a dangerous chain of events with dire consequences, Akbarali says, because chronic users become more resistant to the effects of the drugs.

Research like this is critical amid the U.S. opioid crisis, which killed more than 33,000 people in 2015, according to the Centers for Disease Control. Now, Akbarali and Dewey are working on an alternative to prescribed opioids that does not increase tolerance.

In the same way that much of his work is made possible because of previous findings by other scientists, Akbarali thinks his research could provide a launching pad for his students as well as for researchers at other universities.

His professorship, and Haag’s life as a leader and pioneer, provides constant inspiration for everything Akbarali does. “It’s an honor,” he says. “I hope I’m emulating Dr. Haag’s vision for teaching but also his vision for service as well.”