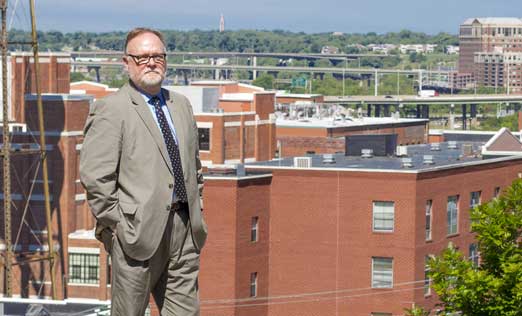 Talk of the town

An annual lecture series at the Wilder School highlights new ways to  tackle planning and design issues in Richmond, Virginia, and beyond

Of the many new faces to have arrived in Richmond, Virginia, during a population growth spurt that has now lasted for seven consecutive years, arguably no one has done more to shape the city’s future than Mark Olinger.

The Dayton, Ohio, native took the helm as the city’s director of planning and development review five years ago. Today, he’s just as convinced of Richmond’s potential as he was on day one.

“We have an influx of younger residents, new residents, people like me who came here for jobs,” Olinger says. “Richmond has an opportu­nity, given its history and its position and the way it has developed over time, to be one of the really great midsize cities in the country.”

With praise for Richmond coming from outlets such as Travel + Leisure, National Geographic and American Express Travel, among many others, the city is riding a similar wave of optimism at least partly because of this infusion of new talent, new minds and new perspectives. Olinger sees it reflected in the city planning department and in Rich­mond’s planning and design community in general, which he says has skewed younger and has become more open to considering new ideas.

This will be critical to the city addressing some longstanding chal­lenges, such as the lack of key resources like jobs, food access, transpor­tation options and quality schools in areas of concentrated poverty.

“People in the profession right now are very sympathetic to the mes­sages that are coming out, like how do we provide more multimodal transportation options, how do we reinvent ourselves without constant­ly building new and sucking the life out of old areas?” Olinger says.

One way to generate more answers to questions such as these is by ensuring the influx of new voices continues. The Morton B. Gulak Lecture in Urban and Regional Planning, presented annually since 2013 by Virginia Commonwealth University’s L. Douglas Wilder School of Government and Public Affairs, was established with this aim.

The lecture series invites renowned experts in planning, archi­tecture or urban design to VCU each year to share their expe­riences and perspectives with students, neighbors and regional professionals. Named for Morton B. Gulak, it was established by the Wilder School with an initial gift of $25,000 from Gulak’s widow, Paula, and their children, and subsequent gifts from the Gulak family, friends and supporters, which created the Mor­ton B. Gulak Associate Professor Emeritus Fund. They chose a lecture series to honor Gulak, a longtime professor in the Wilder School who passed away in 2012 after several bouts with cancer, because they thought it best reflected his interests.

Wilder School Dean John Accordino, who describes Gulak as his mentor when he arrived at VCU in 1986, says a lectureship was appealing not only because of the breadth of its impact but also because it was a way to remember Gulak precisely as he would have wanted to be remembered.

“The idea of the lectureship was to bring, every year, someone who had a foot in practice and a foot in scholarship and academia, as Mort did,” says Accordino, who describes it as “a privilege” to also be a donor to the fund.

Paula Gulak says it is important that Gulak’s twin passions for theory and practice are reflected in the lecture series.

“Mort felt that to be a good planner takes more than reading books and reviewing studies,” she says. “That is ‘background.’ What is critical to the process is personal interaction and the ability to interact with your community. So to be able to bring a speaker in every year who has a different approach to the planning process or is doing something remarkable or innovative is wonderful. It isn’t that the grass is greener elsewhere, but there are key people doing very innovative things impacting cities.

“Students can’t always travel to see what is happening, but it is important that they are exposed to that,” Gulak continues. “Hopefully, it’s not only broadening for students – it’s wonderful for planners, city and regional stakeholders and our community.”

Though Olinger missed last year’s lecture, he attended the previous three. He echoes Paula Gulak’s point about the benefits of bringing a different perspective to Richmond.

“It helps us think a little differently about what we do and how we do it,” he says. “And it gives us some opportunities to think about how, as we’re planning or thinking about projects, what the applications might be here in the city.”

John Moeser, a longtime former colleague in the Wilder School, says the lectures that have had the most relevance to Richmond have been about “the new urbanism”: designing cities more for humans than cars; incorporating a mix of residential, commerce and institutional; building in the context of the exist­ing fabric; and developing a good public transit system.

The local connection of the lectures is one more way the lectureship honors Gulak’s memory.

“Mort’s work was always connected to the community,” Moeser says. “He was interested in satisfying the interests of neighborhoods – commercial districts, real people – and that’s what made his work so important.”

Zewde talked about memorializing the cultural history of a city, even when that history is contentious. Her work had taken her to Rio de Janeiro after the 2011 discovery of an old slave port that had been the point of arrival for millions of Africans into the Americas. She faced the complex task of creating a memorial that not only honored the site’s historical significance but also gained approval from the mayor, the public-private partnership redevel­oping the port, private developers, advocates for Afro-Brazilian rights, community members and even descendants of the slaves.

Zewde saw her mission in terms of commemorating not a single event but a long period in history whose effects still reverberate today. So instead of a simple monument, she designed an area using Afro-Brazilian plants, soil, symbols and patterns to evoke Africa’s influence on Brazilian culture.

Zewde’s experience resonated with the Gulak lecture audience because the issue of how best to memorialize Richmond’s black history is something Olinger says the city is grappling with, from the Lumpkin’s Jail site and the African Burial Ground to the Maggie Walker statue that was recently unveiled at the intersec­tion of Brook Road and Adams and Broad streets.

“It’s clear that that will be a significant part of how we think about urban design, community planning and public art instal­lations in the future,” Olinger says. “Rather than just buying a sculpture somewhere or commissioning somebody to do a sculp­ture, you get more in-depth into thinking about what we’re really doing, where we’re doing it and how that story gets told.”

PART OF THE CONVERSATION

If Grace Leonard, a graduate student in her first year of the urban and regional planning graduate program, is any indication, telling the story more accurately through connecting history and community is set to be a key theme for the urban planners and designers of tomorrow.

A major takeaway for her from Zewde’s lecture was the importance of recognizing your cultural bias and always working with the community to understand their values and visions.

“Zewde inspired all of us to think more critically about what ‘memorial’ means and how we can rely on each other to tell the story of a community in a more authentic way,” Leonard says. “Her whole perspec­tive resonated with me, my perspective on the city and how I aspire to approach planning in Richmond.”

Accordino says the lectures have an enriching effect on his students – “just as Mort did.” But he also points out that they enhance the visibility and reputa­tion of the urban and regional planning program at VCU as a whole.

And, in terms of the broader commu­nity, the lectures serve a powerful purpose in confirming and legitimizing ideas that might already be out there but take a while to become widely accepted.

“What typically happens is that these ideas become part of the common currency,” Accordino explains. “People talk about it, and then later, there’s an impact.”

Gregory Wingfield (B.S.’75/ GPA; M.U.R.P.’76/GPA), a fellow at the Wilder School, the chair of the Gulak Fund and the former president and CEO of the Greater Richmond Partnership, agrees.

“The lecture series contributes to a healthy conversation around urban design and planning,” says the former student of Gulak’s, a subsequent longtime friend of the family and a donor to the fund. “We don’t necessarily have all the answers, but anytime you can have a robust conversation, whether it’s about how you reuse old suburban retail or how you have a more walkable community, it lets people know that there are other things going on in the world that we need to know about and that we can import into Richmond.”

To learn more about the Wilder School, contact James Wasilewski, direc­tor of development, at (804) 828-6205 or wasilewskijr@vcu.edu.

The Gulak lectures: Year by year

2014: World-renowned expert on urban and suburban design Ellen Dunham-Jones argued for the “retrofitting” of suburbia to bring new jobs, activity and services to aging shopping centers and other areas.

2016: Landscape architecture and design expert Sara Zewde talked about negotiating cultural memory in the age of the urban renaissance.

The 2017 Morton B. Gulak Lecture in Urban and Regional Planning will feature Toni L. Griffin, founder of New York-based Urban Planning for the American City and professor-in-practice of urban planning at the Harvard Graduate School of Design. It is at 7 p.m. Oct. 25 in VCU’s University Student Commons, 907 Floyd Ave., Richmond, VA 23284. For more information, visit wilder.vcu.edu/news-and-events/ gulak-lecture.