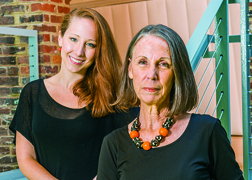 Every March 26 since 2003, Sharon Fuller has marked the birthday of her late husband, Mark Fuller (B.F.A. ’72), with a contribution to help budding art directors at the Virginia Commonwealth University Brandcenter. Her two daughters, Emma and Julie (B.A. ’06), have done the same.

It’s not that the Fullers are art directors themselves, though Sharon is a graphic designer with a rich and varied background in retail advertising and library marketing, but the three share a connection with the Brandcenter from its early days as the VCU Adcenter.

In the late 1970s and ’80s, when Richmond, Va., became known as a leading source of advertising creativity, Mark’s work was credited with generating much of the buzz, said Peter Boisseau, a friend and colleague.

“When Mark passed, there were a lot of people with the notion to do something to honor him and his memory,” Boisseau said. “Through the Richmond Ad Club, the four of us served as a committee and decided to create a scholarship for his daughters.”

Though greatly touched by the tremendous generosity shown by their father’s friends and peers, Emma and Julie suggested that the funds instead be used to create a scholarship at the VCU Adcenter to help carry on their father’s legacy as that of a caring mentor to young creatives in the industry. Their mother agreed.

“It was a family decision to honor him this way,” Sharon said. “One of the things Mark really loved to do was work with new creative talent. He was a great mentor.”

“I’m so thankful that a financial burden has been lifted,” she said. “I’m also extremely thankful to be connected to such a wonderful family and legacy.”

Brandcenter Director Helayne Spivak appreciates those who have contributed.

“Mark’s friends and family established the scholarship in his honor, understanding that giving back to his school and contributing to the future of the industry he loved was what he was about,” she said. “It is our honor to make the annual award in his name.”