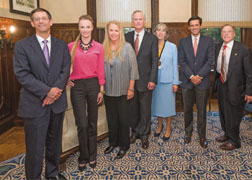 The seeds of interest in health care were sown for Richard M. Bracken (M.H.A. ’77) when he was in college. During a summer job search, he learned about the health administration field from a family friend, a hospital chief executive officer, who also recommended the Virginia Commonwealth University’s College of Health Professions and the Master of Health Administration program.

“That family friend was kind enough to give me a job at a hospital and introduce me to the profession,” Bracken said. “Of course, I applied to VCU’s Department of Health Administration based upon this experience and his recommendation, and the fact that the program has a great track record for placing students in jobs after graduation.”

Such a promising future appealed to Bracken, and he excelled. Today he is chairman of Hospital Corporation of America, a leading provider of health care services in 20 U.S. states and in the United Kingdom.

“I couldn’t have asked for a better preparation for the field,” he said. “I have fond memories of my time at VCU. It’s a highly focused program with a class size that gave us both an opportunity to know the other students really well and a chance to interact closely with faculty. That kind of communication and culture is very important.”

Today, Bracken is a loyal supporter of VCU’s College of Health Professions and the Department of Health Administration. He established the Richard M. Bracken Leadership Award in 2006 to recognize promising student leaders and played a significant role in the establishment of the HCA Emerging Healthcare Leaders Scholarship in 2005. He was named the Department of Health Administration’s Outstanding Alumnus in 2002.

In December 2012, to show his appreciation for VCU’s role in the preparation of professional health care leaders as well as for his own education, Bracken and his wife, Judith, established the Richard M. Bracken Chair with a $1 million gift to support the Department of Health Administration’s efforts to foster excellence in its teaching and research initiatives.

“The school did a fine job not only in presenting the fundamentals of business, finance, accounting and economics, which can be acquired from many good schools, but it also provided something you rarely find, which is interaction with faculty and students who are eager to discuss how these business practices apply to health care,” Bracken said. “The residency program is special and produces very good results. I want that to continue for the next generation.”

The Brackens’ gift is matched by the Glasgow Trusts, which were established in the 1950s before the deaths of Arthur and Margaret Glasgow. Sixty years later, the couple’s trusts totaled $125 million, $45 million of which was bequeathed to VCU to support cancer and other specific areas of medical research, and became the VCU Glasgow Endowment.

At an October 2013 “celebration of excellence,” as described by Cecil B. Drain, Ph.D., CRNA, FAAN, FASAHP, professor and dean of the College of Health Professions, the first Bracken Chair was invested. The honor was bestowed on Carolyn “Cindy” Watts, Ph.D., chair of the Department of Health Administration.

“Richard is really investing in the department and its future,” Watts said. “His view is that what we do is important. Especially now. We’re entering a time where much change can be expected in the health care industry. Well-trained leaders have never been as important as they are today. Richard understands that and he has been an important role model for our students. Having this chair come from Richard and Judith is an honor.”

Family, university leadership, colleagues and friends gathered at the VCU Scott House at the October investiture event to honor Watts and the Brackens and to celebrate their professional accomplishments.

“We honor those who advance our great mission as a research university — helping people,” VCU President Michael Rao, Ph.D., said at the event. “Richard and Judith Bracken have generously given their resources to make a difference to so many. Cindy Watts, as one of the most distinguished health administration researchers in Virginia, is the ideal candidate to inaugurate the Bracken Chair.”

To learn more about the College of Health Professions, contact Jessica Feinberg-Gurganus, assistant dean for development and external affairs, at (804) 828-3269 or jfgurganus@vcu.edu.