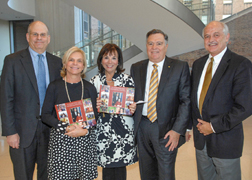 Cards, letters and notes of thanks would arrive over the years, followed by wedding invitations and baby announcements.

Harry and Harriet Grandis were delighted to receive these communications though they sometimes had to be reminded of the sender — grateful Virginia Commonwealth University School of Medicine students who attended the school because of the full scholarships made possible by the couple.

The tradition began in the 1990s. Since then, 13 students from Virginia have received the Harry and Harriet Grandis Scholarship.
“My mother would figure out that the cards were from ‘her students’ and would invite them over for dinner,” said Nancy Grandis White, one of the couple’s daughters. “My father continued to provide the scholarships until he passed away in 2012.”

At a November 2013 luncheon, White and her sister, Betty Sue Grandis LePage, announced a $1 million gift to the School of Medicine on behalf of the Harry and Harriet Grandis Family Foundation to carry on the tradition in honor of their parents.

“We wanted to remember our parents and to continue to do what they did,” White said. “We wanted to keep their name and their memories alive in the way they would have wanted to be remembered.”

The Grandis family’s philanthropy has benefited many areas of the university in addition to the School of Medicine, including VCU Massey Cancer Center, VCU Libraries, the College of Humanities and Sciences, the School of Social Work and the School of the Arts.

“In their lifetimes, Harry and Harriet Grandis took a sincere and personal interest in giving our medical students the best possible start in their careers,” said Jerome F. Strauss III, M.D., Ph.D., dean of the VCU School of Medicine. “Their family has now ensured that Harry and Harriet’s generosity and dedication to society will continue. Generations of future physicians will graduate free of tuition debt and go on to care for patients in Virginia and all over the United States. This gift establishes an enduring legacy.”

The gift from the Grandis Family Foundation launches the school’s $25 million 1838 Campaign to expand the medical school’s scholarship endowment.

“My parents were very kind and gentle people and weren’t looking for praise,” LePage said. “They felt it was important for them to do their part.”

Jill Levine, Harry Grandis’ eldest granddaughter, is proud to see the family legacy continue and knows her grandfather would approve.

“Giving someone an education is the game-changer,” she said.

To learn more about the School of Medicine, contact Tom Holland, associate dean for development, at (804) 828-4800 or tehollan@vcu.edu.

Nancy Grandis White and Betty Sue Grandis LePage announced in November a $1.14 million gift to establish an endowed chair and research fund at VCU Massey Cancer Center to support lung cancer research in honor of their sister, Linda Grandis Blatt. Blatt died of the disease in 2006.

“The Grandis family’s decision to honor the memory of Linda Grandis Blatt is not only inspiring but highly significant to the mission of Massey Cancer Center,” said Gordon D. Ginder, M.D., director of VCU Massey Cancer Center. “Expanding our research efforts related to lung cancer is one of our top priorities as we seek to understand, prevent and treat this particularly deadly form of cancer. I am proud to honor the legacy of Harry and Harriet Grandis by pursuing greater knowledge and innovative approaches to treating this disease with funds provided through the Linda Grandis Blatt Endowed Chair in Cancer Research.”

An additional $1.14 million from the VCU Glasgow Endowment will match the gift. The Glasgow Trusts were established in the 1950s, before the deaths of Arthur and Margaret Glasgow. Sixty years later, the couple’s trusts totaled $125 million, $45 million of which was bequeathed to VCU to support cancer and other specific areas of medical research, and became the VCU Glasgow Endowment.