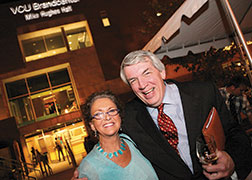 Martin Agency President and Creative Director Mike Hughes thinks he’s received way too many awards in the past year.

In January 2010, the Martin Agency was named “Agency of the Year” by Adweek magazine. In March, Hughes was the 47th person to be inducted into the prestigious One Club Creative Hall of Fame.

His most recent honor was the formal dedication of the building that houses the Virginia Commonwealth University’s Brandcenter as Mike Hughes Hall.

Hughes was instrumental in helping the program’s founder, Diane Cook-Tench, create and build a graduate program in advertising and marketing communications that is recognized as one of the premier advertising programs in the world.

Hughes has served as the chairman of the VCU Brandcenter board of directors since 1995.

“I think people are defined not simply by what they do, but by what they care about and by the quality of that caring,” Adams said. “My partners and I care a great deal about the brilliant job being done by the VCU Brandcenter to bring new talent into our industry, and we care about our dear friend Mike Hughes. Helping to dedicate and name the Brandcenter building was a great thing for us –– it was a wonderfully articulate way to express two of the things we care about most.”

During the building’s renovation in late 2007, Boyko approached Jacobs and Armstrong with the idea of raising a gift to name the building after Hughes. The pair, along with the other Martin Agency partners, all participated in making the gift.

“When we were first in the forming of the design of the building, knowing we were going to raise funds, there were infinite naming possibilities,” Boyko said. “The one that seemed logical was Mike.”

Jacobs said that Boyko and Armstrong approached him about organizing a committee. He then asked Adams to direct the group.

A lead $1 million gift was designated by Michael Roth, chairman and CEO at Interpublic Group of Companies, the holding company that owns the Martin Agency.

The dedication of Mike Hughes Hall was held Oct. 27 at the Brandcenter.

“When I arrived on that evening, it was so cool to look up and see the sign in big letters that read ‘Mike Hughes Hall,’” Armstrong said. “Finally, there was the recognition and the tribute to a guy who has worked so selflessly over the years.”

Hughes recently made a $100,000 gift to the Brandcenter that will fund the Wall of Inspiration, comprising plaques honoring those who inspire students.

At the ceremony, Hughes said the Martin Agency has hired about 60 Brandcenter graduates, and he offered words of advice for the students in the room. “If I have one lesson for students here today, it’s to be attentive to and active in society’s smart discussions and debates,” he said. “There’s no one right way to build a brand or an ad or a department or an agency or a media company or a branding school. There’s no one right opinion of your work. Learning isn’t what’s served up to you — it’s what you go out and get.”

Boyko is grateful that Hughes and the industry as a whole stepped up to support the Brandcenter.

“The collected gifts that contributed to the dedication of the Brandcenter building in honor of Mike Hughes represent a milestone for our school,” he said. “The Brandcenter has grown to be considered the premiere graduate program of its kind and could not have become what it is today without the combined effort of so many who have invested their time, money and talent. Gifts like this ensure that our students will continue to become leaders in the industry and continue to add diversity to the field.”