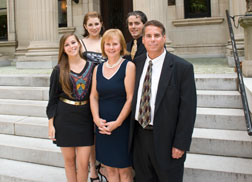 Alum sees life insurance as a way to give back

Of the many traditions in the Singer household, two are standouts: giving back to the community and attending Virginia Commonwealth University. As a University of Virginia alumnus, Cliff Singer stands alone among his mother, who attended VCU predecessor Richmond Professional Institute, his wife, his two daughters and his son-in-law. His wife, Michael Ann (B.S. '02), has high hopes that another son, now a high school freshman, will follow the family lead.

"When I attended VCU, I was in the process of a divorce and had a young child," Michael Ann Singer said. "I struggled on a fixed budget to pay for my education. My parents helped me with child-care costs. At one point, I had to return to working full time and taking classes whenever I could.

"Later, I was an older student in many of my classes, and I got such support and encouragement from my professors and even the dean. I was trying to finish my degree in biology as quickly as I could. I remarried, became very involved in volunteering in the community and worked. It wasn't until I had three children that I finally finished my degree."

Singer's will to succeed and receive an education despite early financial struggles is a testament to her parents.

"I feel so strongly about education because my mother and father did. My mother took three years to complete her associate degree at a community college at a time when she had five children," she said. "My father was also very supportive of education even though he gave up a full scholarship at Purdue to serve in the Korean War. My parents really wanted better for their children and saw education as the pathway out, and it was. If it weren't for them, I wouldn't have felt so strongly about it."

"Costs go up and the cost of living goes up. It's so difficult," she said.

Singer is grateful for the education she received at VCU and had always thought about giving back to the institution that was so supportive of students like her. Years ago, she established a whole life insurance policy with the sole intention of giving back.

"It's very easy and affordable and an ideal way for young people to give a large gift to VCU. It was my intention to give a gift to make a difference," she said.

By naming the VCU College of Humanities and Sciences as the beneficiary of her whole life insurance policy, Singer has made a planned gift to the university that she loves and is now a member of the VCU Heritage Society, which honors donors who have designated planned gifts to any of the schools on the Monroe Park Campus. She has also made it possible for a single mother to pursue the dream of education through the Michael Ann and Cliff Singer Family Scholarship.

"By establishing this scholarship and designating that it will be used to help single mothers attend college, I can make a meaningful difference," Singer said.

"Michael Ann thought about her own experience as a student and planned a gift that will help others," Burke said. "The Singer gift is an example for others who want to celebrate their personal experience while making a difference in the lives of future VCU students."

"It's a tradition for us to give and we're hoping it'll be a tradition for our children," Singer said. "If I can encourage others to make the same type of gift, that would be all the better."

To learn more about planned giving in the College of Humanities and Sciences, contact Lois Badey, director of development, at (804) 827-0856 or labadey@vcu.edu.