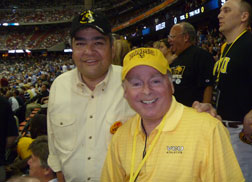 Reba Oley knows a thing or two about dentistry.

She spent time working in her father's Richmond, Va.,-based dental practice as a teenager. So as an undergraduate at Virginia Tech, where she volunteered at a local free clinic, she knew right away that a little girl's tooth could be saved instead of pulled.

Because the clinic didn't perform root canals, Reba Oley did the next best thing. She volunteered her father, Dr. George Oley III (D.D.S. '79), to drive from Richmond to Christiansburg to do the job. A dutiful and charitable father, Oley did what he was asked. That experience brought back memories of his own undergraduate days at Virginia Tech as well as his days at the Virginia Commonwealth University School of Dentistry, where things were a lot different than they are now.

"When I was in school, it was kind of like a fraternity initiation," Oley said of dental school. "Teachers were stern, and the last thing I would have done was contribute to the school. But as you get older, you remember those times fondly. The fact that you experienced bad times makes you appreciate the good times. I guess it was a teacher's job to be tough and demanding.

"That's changed now. Teachers have become communicators and they appeal to students. That's one of the things I'm most proud of about the school today. It's turned a corner and become a nurturing environment for a young dental mind."

Oley and his wife, Siham, made a $500,000 gift to the School of Dentistry, which includes a $100,000 scholarship in the name of his parents, Mr. and Mrs. George A. Oley Jr. In addition, a portion of the gift is designated to the James H. Revere Professorship for Faculty Excellence Fund.

"I have a lot of respect for Dr. Revere," Oley said. "I don't remember a time when I didn't see him impeccably dressed. I saw him in Houston at the Final Four and there he was in jeans and a headband with a painted face. That was pretty cool."

The Revere Fund provides resources to meet the growing need for continuing education while honoring Revere, a faculty member who embodies the ideals of the school. Revere (D.D.S. '65) is director of planned giving for the school and is immediate past president of the MCV Alumni Association.

Oley is proud to honor both Revere and his parents through his gift to the school.

"My father had always wanted me to become a doctor," Oley said. "I didn't want to be an M.D. because he had always been sick most of his adult life. He died when he was 47, and the last thing I wanted to tell somebody was that they had cancer. The worst thing I could tell them, as a dentist, was that their tooth had died."

Dentistry is shaping up to be a family affair with the Oleys. Siham Oley works in her husband's practice and both children are pursuing dentistry. Reba Oley has completed her first year at the VCU School of Dentistry and son George is studying for his dental school admission test.

"The Oleys' generosity is significant," Sarrett said. "Scholarships make a huge difference in helping dental students because there are a lot of expenses, such as licensure exams, that can't be paid for with borrowed funds. Dental school is becoming more and more expensive every year as there is less and less state support."

To learn more about the School of Dentistry, contact Ed Kardos, director of development, at (804) 828-0324 or egkardos@vcu.edu.