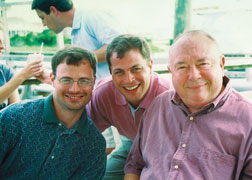 Clay Coleman holds many fond memories of his beloved “Uncle Bubba” — from the stories he told to the “fierce loyalty” he held for his alma mater, Virginia Commonwealth University.

Coleman’s uncle, E.L. “Buddy” Derring (B.S. ’53; M.H.A. ’58), who graduated from VCU predecessor Richmond Professional Institute, put that loyalty to good use in 1997 by establishing annual scholarships in both the College of Health Professions and the School of Business.

“He loved his time in the business school at Richmond Professional Institute,” Coleman said. “After spending time in the Army, he had the opportunity to get his master’s in health administration at the College of Health Professions and eventually became the CEO at Prince William Hospital in Manassas, Va. He had a phenomenal career there and credits VCU for his success.”

Once Derring entered hospital administration, Coleman said, he knew it was his calling.

“That was his passion,” Coleman said. “He dedicated his life to his family and to his career.”

Before his death in 2011, Derring put the wheels in motion to further benefit his alma mater by including VCU in his estate plan. Through a $20,000 bequest to each school, Derring transformed his annual scholarships into endowed awards. Now the Elwyn L. Derring Scholarship in the Department of Health Administration in the College of Health Professions and the E.L. Derring Scholarship in Business will benefit full-time students with financial needs in perpetuity.

“The scholarship is quite meaningful because E.L. really stayed in touch with us and knew what the master’s program was all about,” said Cecil B. Drain, Ph.D., dean of VCU’s College of Health Professions. “He made a financial contribution to help preserve the excellence that he himself enjoyed at our school. That’s what it’s all about.”

E.L. Derring wasn’t the only family member to enjoy the excellence of a VCU education. Two of his nephews, twins Stephen A. and William E. Coleman III, are also health professions alumni.

“Uncle Bubba will always be remembered for his generosity. His presence and generous heart will be missed,” said Stephen Coleman (M.S. ’03), associate pastor at Richmond’s Reveille United Methodist Church.

His brother, William, received his master’s in health administration in 2003.

“Both the College of Health Professions and the School of Business were near and dear to my uncle’s heart,” Clay Coleman said. “Both set him on the path to establish a career. He invested in other people and wanted to help bring them along.”