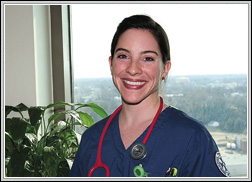 After starting to dance at age 3, Katie Skaggs always dreamed of becoming a ballerina.

“I was selected to be in the ‘Nutcracker’ when I was 8 years old and I saw the professional dancers, and I decided this is what I want to do,” said Skaggs, now 30.

She pursued her dream throughout high school in Maryland, and as graduation neared, she and her mother attended countless auditions in New York City and elsewhere, but Skaggs found the perfect fit in Richmond, Va.

After graduating in 1997, Skaggs, just 17, started an intensive program with the Richmond Ballet. She rented a three-bedroom apartment with two other trainees and worked mornings at a bagel shop, devoting the rest of her time to dance.

“I was really thrown into the real world then,” she said, “but I wanted to be independent.”

At the end of the summer, she was asked to stay on as a pre-professional trainee. Soon, Skaggs moved to apprentice status, a two-year training period. The Richmond Ballet became her second home.

During her second year as an apprentice, the dancer met her future husband, Philip Skaggs, when he joined the ballet.

Skaggs had achieved her childhood dream and had met the man of her dreams, but she always knew her dancing career would end someday.

Soon after her move to Richmond, Skaggs was diagnosed with lupus, a chronic autoimmune disease. With a good doctor and medication, she said, she spent seven additional years as a member of the company.

During her years with the Richmond Ballet, she suffered several injuries. Because of the lupus, she did not heal quickly.

“During my last season, it was just one little injury after another. It seemed like it was just this big, blazing sign — enough is enough. It’s time to take a rest,” she said.

In 2007, she retired, but that opened a new door: a return to school. In the fall of 2008, Skaggs enrolled in the Virginia Commonwealth University School of Nursing.

“I thought when I left dance I’d want to do something more geared toward helping others more directly,” she said. “Dance is all about your body and how your body works, and so is health care and internal medicine. It has always interested me.”

Her dedication to her studies paid off when she received the Lettie Pate Whitehead Scholarship in Nursing for the 2008-09 academic year. To be eligible, students must have financial need and be a resident of either Alabama, Florida, Georgia, Louisiana, Mississippi, North Carolina, South Carolina, Tennessee or Virginia. The Atlanta-based Lettie Pate Whitehead Foundation directs most of its charitable giving to undergraduate scholarships, particularly in health care professions.

“Scholarship awards make it possible for VCU nursing students to borrow less to finance their education; this is more important than ever during difficult economic times like these,” said Susan Lipp, the school’s enrollment and student services director.

For Skaggs, the scholarship has provided much-needed financial relief.

“Receiving the Whitehead Scholarship was such an honor for me, especially as an adult student returning to academics after a previous career,” Skaggs said. “Because of the generous work of this foundation, I have been able to focus my efforts on my academic and clinical nursing studies, instead of being consumed by financial worries.”

Today, Skaggs still spends a lot of time at the Richmond Ballet, either watching her husband or teaching children’s classes.

“I don’t think dance could ever really be out of my life,” she said, “but higher education is always so important.”

To make a gift to the School of Nursing, contact James Parrish, director of development, at (804) 828-5172 or jtparrish@vcu.edu.