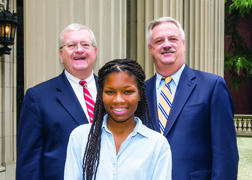 As a member of the Virginia Commonwealth University Alumni Association board of directors in 2009, Robert A. Almond (B.S. ’74; M.Ed. ’85) had an idea to recognize outstanding local high school students while simultaneously promoting VCU as a university of choice.

The concept was simple: Award books and recognition certificates to top high school juniors as identified by their faculty and peers and provide them with campus visits to VCU in their senior year. If the students applied to VCU and were accepted, they would receive $1,000 scholarships from VCU Alumni. Almond’s lead gift in 2010 established the scholarship, and the Monroe Scholars Book Award Program was born.

What began in the city of Richmond, Va., now involves high schools in nine surrounding counties and an annual luncheon to raise funds and awareness.

The basis for the program, explained Ken Thomas (B.S. ’91), immediate past president of VCU Alumni, is to showcase VCU to promising students and to recognize them for their efforts in the process.

“The Monroe Scholars Book Award exposes VCU to those who may not be thinking about it. The program is also a way to bridge VCU Alumni to future alumni. Bob Almond really stepped up to the plate when he proposed the idea four years ago, and we’re so happy with the results,” Thomas said. “Today, we invite more than 30 high schools to participate through student nominations.”

For Kia Jordan, a 2012-13 Monroe Scholar from Maggie L. Walker Governor’s School, the experience clinched the deal for VCU.

“I had been thinking about VCU, but it pushed me more to want to attend,” she said. “I was ecstatic! As a Richmonder, I didn’t really appreciate all that the VCU community had to offer. I was so anxious to leave the city without understanding that the place I needed to be was 10 minutes from my house.”

Jordan learned about VCU through the dual-enrollment program with the Governor’s School and credits her VCU mentor Kimberly Guthrie (B.F.A. ’89; M.A.E. ’98), interim assistant chair and associate professor in VCU’s Department of Fashion Design and Merchandising, who is now her academic adviser, for putting her on the path toward an education in fashion. Thanks to Guthrie’s encouragement, Jordan is studying fashion merchandising as a member of the VCU Class of 2017.

For Almond, the Monroe Scholars Program gives alumni nationwide an outlet for promoting their alma mater.

“I appreciated my education at VCU and wanted to share that enthusiasm with future students. I don’t think the kids in the Richmond area are fully aware of all that VCU offers,” he said. “It’s an unsung hero in the community and a very well-kept secret. It’s a young school and I don’t think people realize that we have one of the oldest schools of social work in the country or that VCU School of the Arts is ranked the No. 1 public university [graduate] arts and design program.

“I’d like to see that secret opened up and exposed to more people. That’s what the Monroe Scholars program is designed to do. It’s a wonderful service project for any alumni chapter.”

For the past three years, the Monroe Scholars Book and Author Luncheon has helped spread the secret about the wealth of educational, academic and research opportunities offered at VCU by serving as a fundraising event for the scholarships and book awards.

“The Monroe Scholars Book Award Program is an example of something that started small and grew into a major recruitment tool,” Almond said.

“We’ve developed a template that can be replicated anywhere. It’s a model for success and awareness. More importantly, the students who come to us as Monroe Scholars help enrich our entire community.”