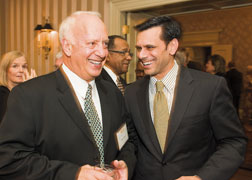 A rousing Quest for Distinction-themed performance by Theatre VCU students had a capacity crowd on its feet and dancing in the aisles at the Oct. 13 inaugural gala celebrating Virginia Commonwealth University President Michael Rao, Ph.D. More than 350 friends packed the Commonwealth Club ballroom to honor Rao on the eve of his official inauguration as the university’s fifth president. The event raised $143,650 in gifts and pledges for the Opportunity VCU scholarship campaign. The Board of Visitors has approved designating the majority of that for the new Michael Rao Inaugural Scholarship Fund.

“In these tough economic times, scholarships are extremely important to support, attract and retain the country’s brightest and most deserving student-scholars,” Thomas G. Snead Jr. (B.S. ’76), rector of the VCU Board of Visitors and chairman of the executive inaugural committee, told donors. “Because of you, our students will have access to more scholarship dollars in the years ahead.”

“From a student perspective, it is humbling to see your investment in VCU, but even more importantly, in the future of students and the future of our world,” Kapoor said.

Rao echoed his gratitude and stressed the importance of VCU’s new strategic plan, Quest for Distinction, in the future successes of the university.

The evening concluded with a special presentation by former rector and current member of the Board of Visitors Dr. W. Baxter Perkinson Jr. (D.D.S. ’70). Perkinson painted an original watercolor, “Turning Leaves at 910,” for Rao to commemorate his inauguration. He also donated hand signed and numbered prints to everyone in attendance.