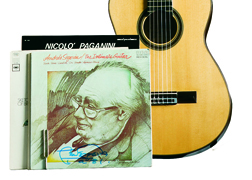 Growing up in Richmond, Va., Antonia F.D. Vassar (B.A. '05), like so many music lovers, accepted Grete Dollitz's weekly radio invitation to join her in the exploration, learning and appreciation of all things guitar.

Dollitz's radio show, "An Hour with the Guitar," was one of the longest-running, locally produced weekly public radio shows in the country. The show, which aired on WCVE-FM in Richmond and many other public stations nationally, began in 1988 and continued until Dollitz's retirement in 2012. She died in May 2013.

To preserve her love of music, especially the guitar, Dollitz bequeathed to the Virginia Commonwealth University Libraries a collection of rare guitar CD recordings, sheet music, her entire collection of WCVE-FM radio programs and at least 1,000 LPs, including an album autographed by classical guitarist Andrés Segovia.

When Vassar, a noted local musician and assistant director for annual giving and donor stewardship at VCU Libraries, learned of the gift, she instantly knew it was significant.

"I'd known of Grete for a long time, so I knew it was going to be a wonderful addition to our collection," she said. "Sheet music for instruments and voice and recordings are all helpful when a student is trying to develop his own technique. Students depend on them."

John Patykula (M.M. '82), assistant chair and associate professor of guitar in the VCU School of the Arts' Department of Music, first met Dollitz in the early '80s.

"Grete highlighted so many of the great guitarists on her show, but she was very good to the young and upcoming artists. Her donation is a continuance of that generous spirit," he said. "Students really need to hear recordings of great artists, and instead of buying them, they can visit the library to increase their familiarity with the work and increase their repertoire.

"Hers is an important donation. It's a big boost to the number of the items we have at VCU."

Currently under review by library staff, Dollitz's gifts are receiving the same care and attention she gave them during her lifetime.

"It's an astonishing collection and one of the most important music donations we've ever received," said Kevin Farley, VCU Libraries' humanities collections librarian. "What really deepens this collection is having her show itself, which is an oral history of guitar — hour after hour of wonderful conversations with artists from Richmond and beyond. One hopes at some point they may be streamed online to reach a global audience of music students, teachers and all lovers of the guitar."