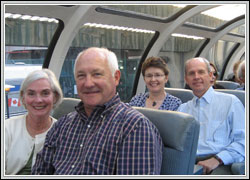 Making a plan, making a difference

To make sure her wishes are fulfilled, even after her death, Dunn has included VCU School of Nursing in her will.

“I am very picky about how I want my money used, and I have specific kinds of things I want to support,” says Dunn, who currently works as a consultant focusing on program planning and evaluation with nonprofit health and human service organizations and health foundations in Virginia. “It is important to me that when I die the distribution of any money left over not be left up to my husband (Keith McGrath) or any other executor … Keith would probably give it all to the University of Richmond Spider Club!”

A planned gift, she says, also will allow her to make a bigger impact on her alma mater.

“The thing about planned giving for many people like me, who may not be able to give large donations during their lifetime, is that they can sometimes give a much larger gift through a designation in their wills,” she says.

Planned gifts allow the university flexibility in funding the most pressing needs at a specific time, says William P. Kotti, Ph.D., president of the MCV Foundation and chief development officer for the VCU Medical Center.

“With the steady decline of state support as a percentage of overall funding, a public-private partnership is vital for sustaining our outstanding academic, research and clinical programs,” Kotti says. “Gift planning by alumni, staff and friends like Dr. Barbara Dunn have made an important difference for MCV Campus initiatives.”

Dunn is a charter member of the MCV Heritage Society, now known as the MCV Society, which honors donors to the MCV Campus who have made provisions for the university in their estate plans. Members of the MCV Society gather several times a year for special events, such as trips to wineries or other locales, for socializing and continuing engagement with the university and the MCV Foundation.

But planned giving can mean more than making a bequest.

“A donor might use a charitable gift annuity to create a scholarship, which is one of our top priorities on campus,” Kotti says. “With the CGA, a donor can make a gift of cash, stock, bonds or other assets to the MCV Foundation, and in return, we give to them fixed payments for life, with a portion of the income tax-free. When the annuity matures, the principal balance is used to create an endowed scholarship that will always feature the donor’s name.”

The donor’s benefits include a fixed, reliable income stream, asset diversification and a meaningful legacy, while providing critical financial support for our students, he says.

“And, of course, we all benefit from the well prepared and caring health care professionals who graduate from the MCV Campus,” Kotti says. “Now that’s what I call a win-win-win situation made possible by planned giving!”

In addition to her bequest, Dunn has made several gifts and pledges to the School of Nursing, including to the Centennial Fund, which raised money for the first endowed chair in the school. She was also one of the initiators of the effort to create the Judith Collins Distinguished Professorship, which honors the longtime educator and nurse practitioner. Most recently, Dunn organized members of her Class of 1970 to raise more than $30,000 for the new state-of-the-science School of Nursing building, where a classroom is named after them.

To her, giving back at whatever level possible is important.

“In this time of budget cuts in the state and individuals looking at how they are spending more critically, I just hope people continue to give what they can to organizations that they care about,” Dunn says. “I really think, especially because VCU is a state institution and because there are more constraints on both resources and the way money is spent, it is very important for the dean to have discretionary funds.

“I hope more people will consider planned giving as a way to leave a legacy with institutions and organizations that they really care about.”

Melanie I. Solaimani is director of Advancement Communications at VCU.