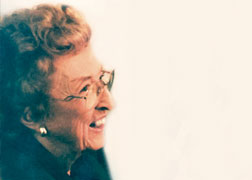 While many Americans hope to age gracefully, Marion Cotter King chose another route: to age gracefully and actively. For nearly three decades, she traveled the world, collected memories and enjoyed life’s pleasures along the way. Now her philosophy is preserved and promoted through the Marion Cotter King Memorial Gerontology Scholarship in the Virginia Commonwealth University College of Health Professions, a scholarship created by her son, J. James Cotter, Ph.D. (Ph.D. ’96), associate professor of gerontology.

“My mother was a travel nut,” Cotter said. “She retired at 62 and never looked back.”

King occasionally accompanied her first husband, Cotter’s father, on international business trips. After his death, Cotter said she supported and raised their two children at a time when most women didn’t work outside of the home.

“It was quite an achievement on her part to keep us together,” he said.

As her grown children settled into their own lives, King remained active and vibrant, defying the tendency for older people to go through a certain amount of crisis when their roles change after retirement, Cotter said. The newly established scholarship aims to reverse that trend by awarding students specializing in research or fieldwork in the areas of elder recreation, leisure and, of course, travel.

King visited 44 countries and set foot on every continent except Antarctica. Once, a friend phoned to tell her about a trip planned for the next day to which she replied, “I’m in,” without knowing the destination or the details. King was also a food lover who vividly remembered favorite restaurants from her trips at home and abroad. She would often show her son all the “hot spots.” After his mother’s death at 92, Cotter established the scholarship in her honor.

“A lot of folks come into our department from an activities or parks and recreation environment,” said E. Ayn Welleford (M.S. ’93; Ph.D. ’98), chair of the College of Health Professions’ Department of Gerontology. “This scholarship is specific to those students who start out in recreation or elder leisure. They find out that they really love this population and that there’s so much more to know. The Cotter King Memorial Scholarship will help them learn.”

The scholarship honors two of Cotter's passions: gerontology and his family, said Cecil B. Drain, Ph.D., dean of VCU’s College of Health Professions.

“The opportunity to celebrate his mother through this generous gift was very important to him and it is certainly most appreciated by the school,” Drain said.

King’s mastery of the art of aging is an inspiration to many, including her grandchildren, three of whom attended VCU: Evan Cotter (B.F.A. ’03), Drew Cotter (B.S. ’06) and Margaret Cotter, who is studying in Turkey as a Boren Scholar and will receive her degree in 2012.

“Her positivity and her engagement with life is certainly part of her legacy and part of the reason she thrived so well after retirement,” Cotter said. “The scholarship will help others do the same thing.”

To learn more about the College of Health Professions, contact Jessica Feinberg-Gurganus, assistant dean for development and external affairs, at (804) 828-3269 or jfgurganus@vcu.edu.