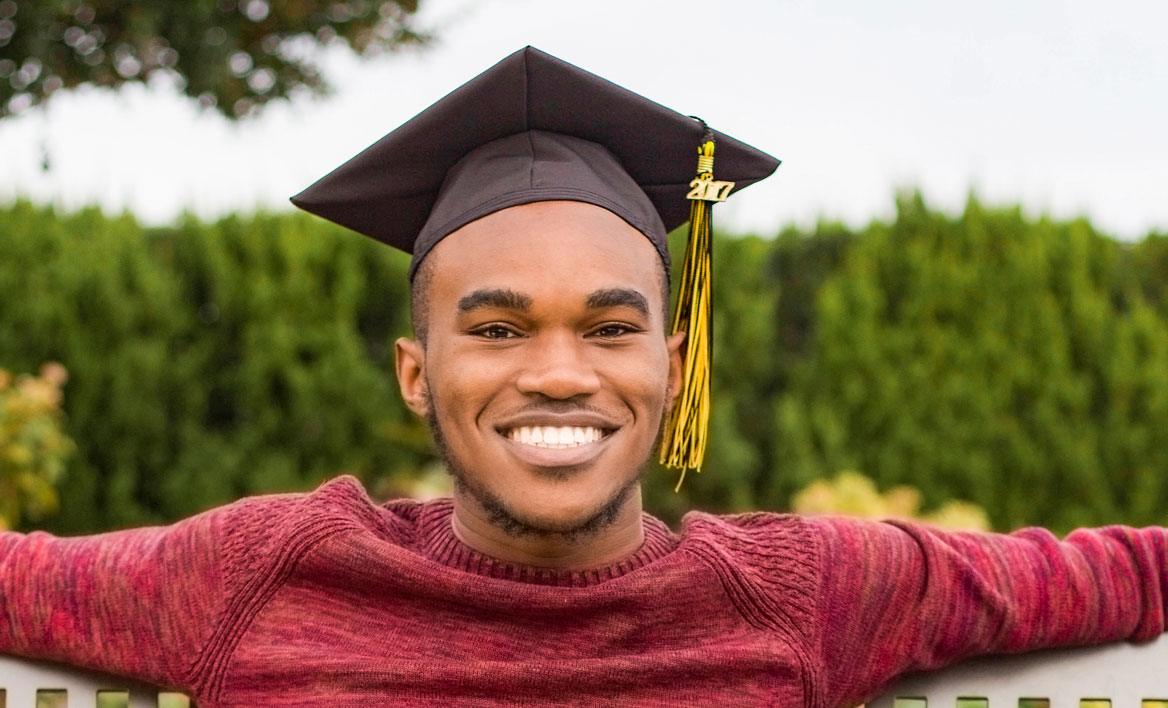 Fresh out of the Virginia Commonwealth University School of Business, Curtis Holloway (B.S.’17/B) already has a reputation. As a student, he was well-known for his work ethic, leadership skills and extensive involvement on campus. And by the time he earned his degree in accounting and human resources a semester ahead of schedule, in December 2017, he already had a job offer from the Washington, D.C., office of Chicago-based accounting firm BDO.

To Holloway, these accomplishments once seemed out of reach.

He remembers sitting with his mother at the kitchen table in their Maryland home.

“Both of us were crying,” Holloway says. “We were looking at all of our finances and realizing how hard it was going to be for us to afford tuition.”

But they knew VCU was where he belonged and resolved to do whatever it took to get him there – despite the even greater financial burden he would incur as an out-of-state student.

Before Holloway officially enrolled in 2014, his mother gave him some advice.

“My mother told me that a closed mouth never gets fed, and I took it to heart,” he says. “You have to take initiative to get whatever it is you need to accomplish your goals.”

A SENSE OF SECURITY

Holloway abandoned his comfort zone early in his first year on campus. He realized that he needed help navigating his options for academic, professional and, most important, financial assistance and wasn’t going to let a fear of putting himself out there hold him back.

“A close friend always told me that the answer to every unasked question is ‘No,’” he says. “I knew that the more people I was able to connect with, the easier it would be to reach out to someone for advice.”

With guidance from staff in admissions, student affairs and the School of Business, Holloway applied for scholar-ships. When recipients were announced in the spring semester, he was elated to tell his mother he had been selected for two awards.

“I called her as soon as I found out,” he recalls. “We were crying again, but this time it was tears of joy. We were just so relieved.”

“Each scholarship helped me ensure I would be able to come back to VCU for the next semester,” Holloway says.

Holloway focused on preparing for his future. He took advantage of School of Business programs such as BizConnect, which facilitates opportunities for professional development and mentor-ship between students and local business professionals in their field of interest. He was matched with Joseph E. Becht Jr. (M.B.A.’80/B).

“Being a mentor is an awesome experience,” says Becht, managing partner at Becht Advisory Group in Mechanicsville, Virginia, and an active member of the VCU Alumni Board of Governors and VCU Alumni’s Business Alumni Society. “Curtis is enthusiastic, eager and always interested in improving and taking himself to the next level. It’s fun to watch someone mature and grow through the years, and it’s been an honor to help him position himself to be successful in the long run.”

Fostering relationships with students like Holloway, with whom he is still in touch, is one of his greatest passions, Becht says. In 2017, he created the Becht Family Scholarship to help ambitious students prosper at VCU. The award will be given annually to an undergraduate student in the School of Business who has demonstrated financial need, is an active member in a School of Business- affiliated student organization and has a GPA of at least 3.0.

“Curtis stands out to me as being particularly hardworking,” Becht says. “I meet a lot of students who, like him, are dedicated and driven but still struggling to afford their college expenses. I know those students have the potential to be left behind, and I don’t want that to hap-pen. As long as I have the means, I would like to help them accomplish what they want to accomplish.”

School of Business Dean Ed Grier says that promising students should not miss out on the opportunity to further their education because of a lack of financial resources.

“The VCU School of Business is able to attract and retain high-achieving students like Curtis Holloway thanks to generous contributions from our donors,” he says. “Their support is essential to our ability to serve our students and to our growth in prominence as a leading business school.”

Holloway learned that a helping hand can provide hope and courage in times of hardship, and he looks forward to providing that support to future VCU students as soon as he has the means.

“I already know that I plan on giving back to VCU,” he says. “I’d love to donate to scholarships, but I also hope I have the chance to be a mentor to other students. I overcame my struggles, and I want to be someone other people can learn from and look up to.”

And for students who might relate to his story, Holloway has some familiar advice.

“My mother was right – you can’t just wait for opportunities to fall into your lap,” he says. “I hope I can inspire future students to overcome the challenges they face by working hard and seeking support from others when they need it.”