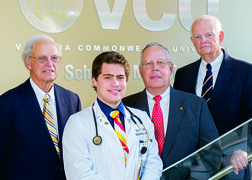 The Virginia Military Institute experience is one that stays with alumni for a lifetime.

For VMI students hoping to study medicine that spirit of community has helped pave the way for an experience on the MCV Campus.

In 2008, Koontz and fellow VMI alumnus David S. Wilkinson, M.D., Ph.D., professor and former chair in the VCU Department of Pathology, worked to include VMI in the School of Medicine's Preferred Applicant Track, which allows students enrolled at select undergraduate colleges and universities to apply to medical school at the end of their sophomore year. If accepted, those students are guaranteed admission, provided they stay on track for grade and service requirements. As many as 15 VCU undergraduates are accepted annually into the program including up to two students from VMI.

Once the preferred track was in place, Koontz made a lead gift in 2009 to establish the VMI Scholarship Fund, gaining support from other VMI alumni, including Bruce C. Gottwald Sr., a member of the VMI Board of Visitors and a longtime supporter of the MCV Foundation and VCU's College of Engineering.

"VMI is a shared experience," Gottwald said. "It's four years of close association with your fellow cadets. That builds a certain amount of pride that stays with you. You work your way to graduation by a good bit of extra hard work and responsibility. That's got to be a plus for medical students."

Quinn C. Wicks, a third-year medical student, was one of the first VMI undergraduates admitted to the School of Medicine via the Preferred Applicant Track. He also is one of the first recipients of the VMI Scholarship.

Gottwald's generosity has touched Wicks' life more than once. At VMI, he was awarded the F.D. Gottwald Scholarship, established by Gottwald and his brother, Floyd, in honor of their late father.

Fundraising for the VMI Scholarship at VCU, which is awarded based on need or merit, now stands at more than $200,000, said Wilkinson, whose long-term goal is for the scholarship to cover full tuition for every VMI student admitted to the School of Medicine.

"Scholarships are vital in making medical education affordable," said Jerome Strauss III, M.D., Ph.D., dean of the School of Medicine. "Our Preferred Applicant Track with VMI has brought us some outstanding and disciplined medical students. But these VMI alumni have taken it a step further. I admire the remarkable loyalty they have shown to their alma mater and to their fellow graduates by creating a scholarship that gives a helping hand to VMI cadets who dream of studying at our School of Medicine."

To learn more about the VCU School of Medicine, contact Tom Holland, associate dean for development, at (804) 828-4800 or teholland@vcu.edu.