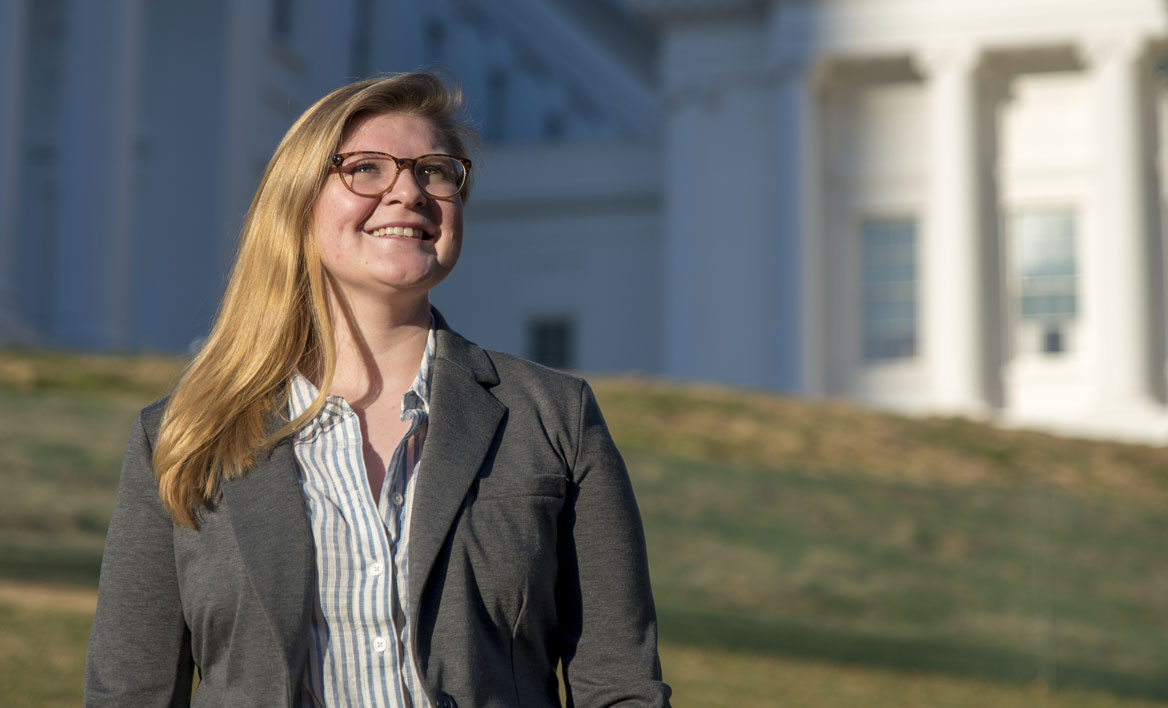 Many universities can provide students with a quality political science education, but a school in the right location can enhance the experience by offering a close-up look at government in action. Virginia Commonwealth University’s prime location in Virginia’s capital city is ideal for civic-minded students like Sara Thornton (B.A.’17/H&S).

Thornton grew up just 10 miles from VCU in Henrico, Virginia, but when she graduated from J.R. Tucker High School in 2013, she decided to leave the familiarity of her hometown to study political science at the University of Mary Washington. By the end of her second year, she had developed a clearer idea of her professional goals and realized what she had to gain by returning home to take the next steps toward a career in public policy.

“With the General Assembly and the governor’s office nearby, I knew I’d have more opportunities for involvement in politics living in Richmond,” she says.

Thornton was eager to pursue those opportunities when she transferred to VCU in 2015 to finish her degree in the College of Humanities and Sciences. In her two years at VCU, she completed multiple internships, including one in the governor’s con­stituent services office where she fielded phone calls from people from throughout the commonwealth.

She also canvassed with advocacy groups, volunteered for several political campaigns and, leading up to the 2016 election, traveled to New Hampshire for the presidential primary during winter break 2015.

“It was great exposure to what a presidential campaign looks like in the primary stage,” she says. “We got to campaign a little, helping with things like canvassing, phone banking and assem­bling signs. We even got to speak with some of the candidates.”

The New Hampshire trip was part of the political science intersession course Political Campaigns and Communication. Philanthropic gifts covered travel expenses but not tuition for the course. Because her federal financial aid did not cover courses outside of the fall and spring semesters, she was required to pay for it on her own.

Thornton could afford this experience and others with help from the Short Pump Ruritan/Civic Foundation Scholarship, which she received in 2016. The need-based endowed scholar­ship is awarded annually to a student in the VCU College of Humanities and Sciences who lives in Henrico County, Virginia. The community service organization established the fund with $100,000 in 2014 as part of its mission to support educational and leadership programs for residents of the area.

Such awards are key in making unique and immersive learning experiences accessible to students.

“The College of Humanities and Sciences is committed to offering a transformational education to our distinctive student population,” explains Montserrat Fuentes, Ph.D., dean of the College of Humanities and Sciences. “Our alumni and friends share that commitment, and their support provides hardworking students with financial support while they study and apply that knowledge in their community.”

The Short Pump Ruritan/Civic Foundation has since dis­solved, but Donald Fitzgerald, who served as president of the organization in 2014 when it established the fund, says he hopes the endowment continues to help students like Thornton pursue opportunities for civic engagement while in school.

“The more these students are involved in activities both in and outside of the classroom, the more they are going to grow and learn through those experiences,” he says.

Thornton has maintained her passion for politics since grad­uating in May 2017. During the 2017 Virginia state elections, she worked as a field organizer for Schuyler VanValkenburg, the winning candidate for the House of Delegates in Virginia’s 72nd district – which, coincidentally, includes a large portion of the area where she grew up and the community for which her scholarship was established.

Although she isn’t sure if she wants to live in the Richmond area forever, Thornton is grateful for the ties she has to her hometown. She wanted experiences that would prepare her for a lifelong career in political campaigning and is confident that her decision to transfer to VCU was well worth it.

“I definitely got what I was looking for,” she says.