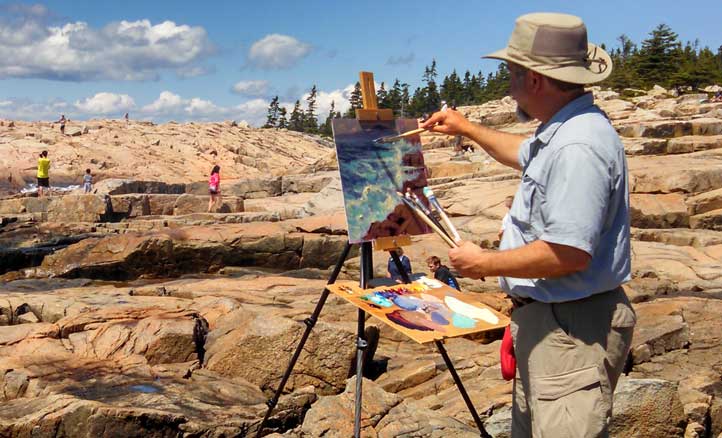 As a student at the VCU School of the Arts in the 1980s, André Lucero received a big boost from a scholarship that recognized his talents and helped him pay for his tuition. More than 30 years later, Lucero still credits that scholarship with giving him the confidence to pursue a career as a plein air painter – a field in which he is garnering significant recognition and acclaim.

Taking in the sights and sounds around him, painter André Lucero (B.A.’89/A) has placed himself in front of Tuckahoe Plantation, the boyhood home of Thomas Jefferson, built in the 1700s.

“The weather is perfect, the birds are singing and in front of me is a beautiful, historic landmark,” says Lucero, who lives not far from the plantation, in Goochland, Virginia. “It’s a breathtaking scene, and I feel that way about so many beautiful places that I have seen and painted. My goal is always to translate those feelings into my paintings.”

Lucero discovered the plein air scene a few years ago. Named for the French term “en plein air,” meaning “in the open air,” its practitioners paint on location rather than in their studios.

Since embracing the style, Lucero has made a name for himself in the field. In February, he was featured on the cover of the well-regarded PleinAir Magazine, which boasts a readership of more than 100,000.

Plein air painters from around the world frequently assemble for weeklong juried events in picturesque destinations to paint outside en masse. These events attract hundreds of applicants, but only dozens are chosen to participate. This year, Lucero was selected to take part in 12 events in places such as the deserts of San Angelo, Texas, and the serene harbors of Cape Ann, Maine. In June, he was one of 30 artists participating in Plein Air Richmond, where he had the opportunity to reminisce on his days living in the city’s Fan district as a student at Virginia Common­wealth University.

“It was fun for me to experience Richmond in that way,” Lucero says, adding that he has a special place in his heart for the city, where he got his start as an artist.

Although he makes his living as a painter now, Lucero’s first career was in illustration. After earning a degree in Communication Arts and Design from the VCU School of the Arts, he worked as a freelance illustrator and had his work featured in publications including the New York Times, Playboy and U.S. News & World Report.

“I enjoyed the work, but my heart has always been for fine art,” Lucero says. After 10 years as an illustrator, he made the decision to follow his true passion.

Lucero credits his time at VCU for giving him confidence in his work and his ability to take risks in his career. When he came to VCU as a transfer student, he was quickly recognized for his talent. In the spring of his first year, he was named the inaugural recipient of the Mallory Callan Memorial Scholarship.

“As a young student, that recognition helped me realize that I had what it was going to take to pursue art as a career,” Lucero says. “I was able to focus on my art and academic work without the stress of worrying how I was going to afford tuition.”

The full-tuition award, given annually to one illustra­tion student based on need, merit and creative ability, honors former VCU faculty member Mallory Callan (M.F.A.’84/A). Callan, a professional illustrator, became a professor at VCU in 1978 after moving to Richmond from New York City. After eight years in VCU’s Communication Arts and Design department, Callan passed away in 1986 following a brief illness. Friends, faculty and former students commemorated his service to VCU by establishing a scholarship in his honor that same year.

“He was certainly an early role model for me,” says Jim Nuttle (B.F.A.’81/A), former student and donor to the fund. “He was probably the first professional illustrator I had ever met, and having him as a professor gave me the chance to learn from someone who had found success in the field that I was pursuing.”

Nuttle took one of Callan’s courses in 1978 and remembers the course challenging him and his classmates to embrace an expanded view of the world.

“He really encouraged us to think critically about our work and how we approached the creative process,” says Nuttle, who has carried that advice with him throughout his career in design and illustration.

The Mallory Callan Memorial Scholarship has also received support from other graduates of the School of the Arts who want to provide students in the Commu­nication Arts and Design department with the same quality of educational experience they had.

“My education at VCU gave me a strong background in graphic design, and without that background, the career that I’ve had would not have been possible,” says Susan Jenkins (B.F.A.’69/A), who, after graduating, worked as a graphic designer before opening her own advertising agency. Although she never knew Callan, Jenkins contributed $10,000 to the scholarship when it was established.

“Merit-based scholarship funding is encouragement and acknowledgement for the stellar efforts of exceptional, high-achieving students,” says James Frazier, Ed.D., M.F.A., interim dean for the VCU School of the Arts. “These awards show students that we see them, we value them and that their success is important to us.”

Lucero’s talents have continued to propel his success, as they did during his time as a student. His paintings, which sell at prices ranging from $1,000 to $12,500 and are featured in galleries along the East Coast, have earned him a reputation as a gifted and dedicated artist.

“Being an artist is a love affair with beauty,” Lucero says. “That’s what drives the work I do. It just so happens this is how I make my living.”