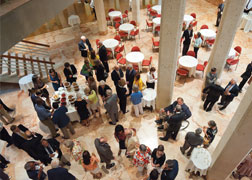 In the early 1950s, Arthur Graham and Margaret Branch Glasgow named the Medical College of Virginia in their estate plan. Their wishes were to advance efforts to cure and prevent cancer and other degenerative diseases. They died soon thereafter.

Sixty years later, after the death of their last heir, the couple made possible the largest cash gift in the history of Virginia Commonwealth University.

“For Richmond, and our entire community, it’s amazing to think of the foresight that the Glasgows had more than 60 years ago,” said VCU President Michael Rao, Ph.D., at a special ceremony held in August at the Virginia Museum of Fine Arts.
The museum and 13 other local groups also were beneficiaries.

“The impact of their generosity enhances the quality of lives, our culture, our health and our service to the community in so many different ways,” Rao added. “Their gift will be used in the same forward-thinking, generous and compassionate spirit in which it was given to support the cure and prevention of cancer and other degenerative diseases.”

Sixty years after their deaths, the couple’s planned gifts totaled $125 million.  Nearly $70 million — another record cash gift — will go to VMFA to strengthen its vast collections, $45 million will be dedicated to VCU’s cancer research and prevention programs and the remaining $10 million will be distributed to 13 nonprofit organizations in Richmond and elsewhere.

The impact of the VCU gift is far-reaching.

“Arthur and Margaret Glasgow had an incredible vision for what they could accomplish through the creation of their trusts, although I suspect the full impact of their generosity goes beyond their expectations,” said William P. Kotti, Ph.D., associate vice president and president of the MCV Foundation. “The power of their extraordinary gifts is truly inspirational and will transform the lives of generations of students and patients on the medical campus of VCU.”

The Glasgow gift to support finding a cure for cancer also has the potential to affect the VCU Massey Cancer Center’s quest to achieve “comprehensive” status from the National Cancer Institute. The Massey Cancer Center has maintained its current NCI status as a designated cancer center since 1975. A comprehensive status would help attract critical NCI funding. Through their planned gift, the Glasgows significantly bolstered the center’s ability to raise additional funds as well as awareness of its nationally recognized programs.

From naming a beneficiary in a will to setting up a trust, donors have many options for contributing to the future financial health of VCU and its programs.

Gifts such as these foster new discoveries, sustain programs and much more.

“The Glasgow gift is truly transformative,” said Dr. Sheldon Retchin (H.S. ’79), vice president for VCU Health Sciences and CEO of the VCU Health System. “It paves the way for a remarkable surge in our research efforts in cancer and other chronic illnesses. The Glasgow family truly had a philanthropic vision that will now become reality.”

Born in Richmond in 1876, Margaret Elizabeth Branch was the daughter of John Patteson Branch and Mary Louise Merritt Kerr Branch. She was a cousin of James Branch Cabell, the namesake of the VCU Monroe Park Campus library. Arthur Glasgow, an engineer and brother of the Pulitzer Prize-winning author Ellen Glasgow, was born in Botetourt County, Va., in 1865. He formed a partnership with Alexander Humphreys in 1892 creating Humphreys & Glasgow, an engineering firm in London that specialized in building gas plants.

The two married in 1901 and had one child, Marjorie, who married Ambrose Congreve, in 1935. Congreve had a passion for gardening and died earlier this year while in London to attend the annual Royal Horticultural Society Chelsea Flower Show. He was 104 years old. The couple had no children.

“The Glasgows’ gift is the kind of gift that elevates a university like ours even further,” Rao said. “As a major research university, a gift of this magnitude enables us to support the people, the facilities and the programs necessary to make a difference in peoples’ lives and certainly in the health of our community.”