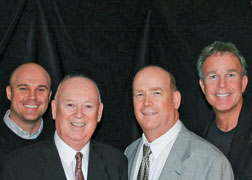 The term “family affair” is no understatement when it comes to the Kellihers from Fairfax, Va., where six of seven children followed their father, Jeremiah, into the dental profession. Three are alumni of Virginia Commonwealth University’s School of Dentistry.

Brother Jimmy opted for an insurance career and provides a breath of fresh air at family gatherings “where discussions usually revolve around dentistry,” Sean Kelliher said.
Several years ago, one of those discussions among Dan, Jerry and Sean was about how to honor their father in a special way.

“We have been forever inspired by our father and wanted to continue the legacy he created,” Dan Kelliher explained. “His leadership and support extends beyond our family and into the communities we serve.”

Honoring their father’s inspiration, the brothers decided to create a scholarship in his name. They turned to the VCU School of Dentistry because their dad became an alumnus without a home after the closure of Georgetown University’s dental school in 1990.

The brothers established the Jeremiah J. Kelliher Sr., D.D.S. Scholarship in 2011 with a pledge of $25,000 and presented their father with a framed letter announcing the scholarship at a family gathering during the Christmas holidays.

“It’s something that lasts,” Jerry Kelliher Jr. said. “For a family like ours, with a dental heritage, it seemed like the right thing to do.”

The scholarship was awarded for the first time in April 2012 to Dane Hernandez, a fourth-year student from Sterling, Va. “I feel so honored to be the first recipient of the Kelliher Scholarship,” she said. “This makes me think about giving back when I become a dentist. I feel like it’s the beginning of a cycle, once you’re helped, you feel like helping others. I’m very blessed and grateful.”

Scholarships are vitally important for students today according to David C. Sarrett, D.M.D., dean of the VCU School of Dentistry “The Kelliher legacy here at VCU is very meaningful to us and now Dr. Kelliher Sr., though a graduate of Georgetown’s School of Dentistry, has found a home here as well,” he said.

Scholarships, Sarrett said, are the School of Dentistry’s No. 1 fundraising priority.

The brothers are glad to be making a difference for the next generation of VCU students.

“VCU was challenging,” Jerry Kelliher Jr. said. “It was a great education. That was one of the reasons we wanted to help continue its tradition of being one of the best dental schools around.”

“We Kellihers owe VCU a debt of gratitude.”

To make a gift to the School of Dentistry, contact Gloria Callihan, associate dean for development and alumni relations, at (804) 828-8101 or gfcallihan@vcu.edu.