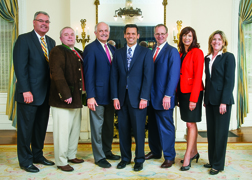 Thanks to Richmond, Va.-based Universal Corp.'s latest investment in Virginia Commonwealth University Massey Cancer Center, Dent, professor and vice chair for research in the Department of Neurosurgery, can continue this groundbreaking research.

The endowed chair continues to support Massey's research in this critical area and will be held by Dent, who has benefited from Universal Corp.'s support since 2003.

"Although our foundation is not large, we decided that we want to have a significant impact on Massey and, in particular, on Dr. Dent's groundbreaking research," said George C. Freeman III, chairman, president and CEO of Universal Corp. "Universal believes in the work being performed at Massey, and this gift is a reflection of our commitment to furthering the fight to defeat cancer."

Universal Corp. has made significant contributions to Massey's cancer research efforts since 2002 and is a longtime supporter of VCU with a history of universitywide philanthropy totaling more than $2 million.

"We are profoundly grateful for the sustained financial support from Universal Corp. for research at Massey Cancer Center," said Gordon D. Ginder, M.D., director of the VCU Massey Cancer Center and Lipman Chair in Oncology. "This support has been vital for Dr. Dent and his collaborators at Massey to make new discoveries in basic research and translate them into better treatments for cancer."

"It's just amazing, and I am very grateful," Dent said. "During these challenging times for researchers, this gift has enormous implications for my productivity at Massey and VCU."

"We feel that it is our corporate responsibility to give back to the community," said Mike Ligon, vice president of the Universal Leaf Foundation. "Our interest in Dr. Dent's work was piqued several years ago when we visited Massey. Our recent opportunity to hear more about his research further convinced us that his work has the potential to have significant impact on how patients are treated. We can't think of a more exciting way to invest in Massey."